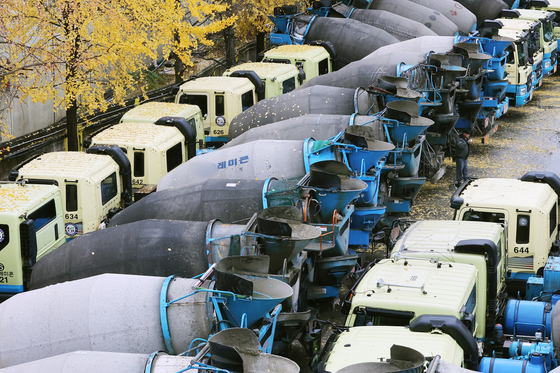 Cement trucks sitting at an empty space of a factory in Anyang, Gyeonggi, as they have been forced out of service due to shortage in diesel exhaust fluid. [NEWS1]


Some 200 tons of urea, the key component of diesel exhaust fluid (DEF), will be arriving from Vietnam next week, the government announced Monday.

DEF, needed by diesel cars and trucks to run, is in short supply in Korea and the shortage is threatening to take those vehicles off the roads.

A government task force led by Vice Finance Minister Lee Eog-weon held a meeting Monday and discussed negotiations with numerous countries including Vietnam to find 10,000 tons of urea. A supply of 20,000 liters that is supposed to be coming from Australia was bumped up to 27,000 liters.

Since 2015, many diesel-fueled vehicles have been equipped with a Selective Catalytic Reduction (SCR) system that needs DEF. The SCR reduces nitrogen oxide emissions.

Many vehicles are engineered not to operate without DEF, and the vehicle is fully or partially disabled when its DEF reservoir is empty.

Korea's shortage is a result of China tightening export restrictions last month on fertilizers, including urea, which is extracted from coal.

China accounts for 66 percent of all Korean imports of urea. Indonesia's supplies account for 13.8 percent and Qatar's 10.5 percent.

The DEF shortage is having an immediate impact.

Many cargo trucks have been forced out of service. It's estimated there are 2 million cargo trucks with SCR systems.

Kwon Yong-joo, a Kookmin University automotive design professor, said a major cargo crisis could arise in mid-December, with only a month's supply of DEF left in the country.

“If all cargo is stopped, every factory will come to a halt, and one could think of the entire country as coming to a standstill,” Kwon said.

Korea's entire supply chain is at risk, both domestically and for exports.

President Moon Jae-in weighed in Monday, telling his government to find any means to stabilize the situation during a meeting with advisors at the Blue House.

According to Blue House spokeswoman Park Kyung-mee, Moon during the meeting asked the public sector to check its reserves of urea, encourage the use of diplomatic channels and demanded a crackdown on hoarding of DEF or its components.

The government on Sunday announced tough rules to stop hoarding.

DEF retailers that have stocked more than 110 percent of their average monthly sales will be considered hoarders, as will retailers who have stock but not sold any imported or manufactured DEF for 10 days.

Anyone that hoards DEF will be faced with fines up to 100 million won ($85,000) or three years in prison. The government said the crackdown will be applied until the end of the year.

According to the Environment Ministry, 87 suspected cases of hoarding were reported Monday.

But the government faced public ridicule after it announced it was shipping in 20,000 liters of urea water solution from Australia.


The supply from Australia is only enough to supply 333 cargo truck with 60-liters of DEF each.

While the Korean military has not yet officially made an announcement, there have been reports that it is looking into  releasing its DEF reserves.

Appearing at the National Assembly, Prime Minister Kim Boo-kyum publicly apologized for the government handling of the DEF crisis.

“If we were a little bit more active in the early stage, we might have prevented the situation from getting worse,” Kim said.