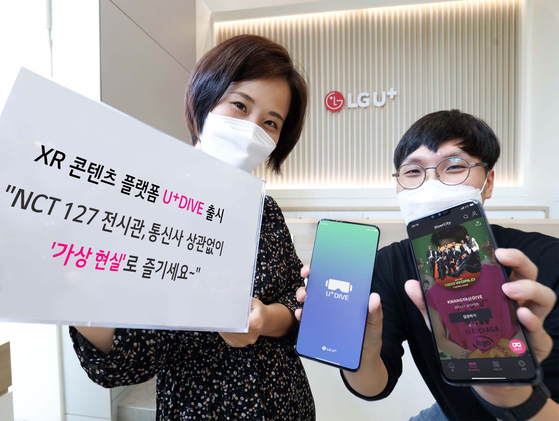 The new app, dubbed U+DIVE, is meant to let people “dive” into the extended reality (XR) experience, according to LG U+. XR includes both VR and AR, as well as mixed reality (MR) content.

The content offered by the app covers eight categories, including education, gaming, webtoons and travel.

The first new content in line is an XR exhibition featuring NCT 127, which is managed by SM Entertainment. Viewers will be able to travel through the virtual exhibition hall and play different games and missions that are prepared in the virtual space.

Photos, videos and voice recordings of NCT 127’s members that have not been revealed beforehand will be exclusively offered for fans for the first time. The exhibition will be available in 21 countries, including the United States and China.

U+DIVE will offer 3,000 entertainment items in total by January next year, the company said.

The app is currently available on Google’s Play Store and will be available for Apple users starting Wednesday.

LG U+ AR glasses really can put 'Blackpink in your area'