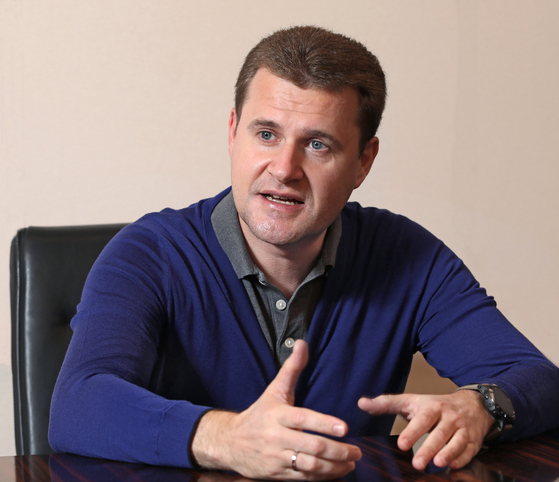 Alexei Chekunkov, minister for the development of the Russian Far East and Arctic, speaks with the Korea JoongAng Daily at the Lotte Hotel Seoul on Friday. [PARK SANG-MOON]


Russia envisions that the Northern Sea Route will be fully operational before the end of the decade, and that it could get there with help from the South Korean shipping industry, said a top Russian official representing the country's Arctic interests.

“We are building a new fleet of icebreakers that are more powerful, that will be able to allow shipping through the seas all year around,” said Alexei Chekunkov, minister for the development of the Russian Far East and Arctic, speaking to the Korea JoongAng Daily at the Lotte Hotel Seoul on Friday.

“We are about to enter an era of bullet train [in terms of the speed of developing the route], and around 2027, ’28 or ’29 the Northern Sea Route will really be established as a mainstream global transport corridor,” he said. “There is a schedule of 10 years ahead [with Korea] on [liquefied natural gas] tankers that are being built in Russia with a lot of Korean input and technology.”

Chekunkov visited Korea from Nov. 1 to 5 to attend an inter-regional forum between Korea and Russia and discuss what he called uncharted paths on bilateral ties, including cooperation on renewable energy. His delegation consisted of business executives, who met with their counterparts in Korea’s energy and infrastructure sectors including Korea Gas Corporation, LH Corporation, Hyosung Heavy Industry, Samsung C&T, SK Gas and Lotte Chemical.

The minister, in wrapping up his meetings on Friday, also spoke of Russian President Vladimir Putin’s increased attention on the Asia Pacific region, including partnering with Korea on infrastructure developments in the Russian Far East and continued Russian support for an inter-Korean railway under the right circumstances.


Q. How would you summarize your visit to Korea?

A.  Korea is a major destination for two of the most important exports that the [Russian] Far East has: one is hydro carbons, oil and LNG, or liquefied natural gas, and another is Russian fish and seafood, which is most exclusively produced in the Russian Far East and the Arctic region.

But during this visit, we discussed mostly not what we are doing now, but what we are going to do. I was impressed by how big of a share of our discussions concerned hydrogen. I see that Korea does believe that hydrogen could be a solution in the future, given that Korea also imports a lot of energy sources. Today, I’d say the countries developing hydrogen solutions are like unconnected archipelago — that once the market emerges, we would be able to partner together on this.


In this past week you also met with Song young-gil, head of the ruling Democratic Party and previously Korea’s special envoy to Russia. Was the so-called Nine Bridges project proposed by President Moon Jae-in to Russian President Vladimir Putin part of the discussions with Song and other policymakers?

One of the important projects that makes part of the Nine Bridges program is the creation of a Korean industrial park near Vladivostok, for which several dozen Korean companies expressed interest, including LH Corporation. We are also building a new satellite city to Vladivostok, a land of 1,000 hectares [2,471 acres], next to the Russian-Korean industrial park. We call this town Sputnik, which in Russian means satellite. It will be a new town in the Russian Far East aiming at 100,000 people initially to grow to 300,000 people. The town would include projects implemented by the largest Asian countries, our friends in the Asian Pacific region, Korea, China and Japan.


The Nine Bridges program also includes a gas pipeline partnership with Russia and the two Koreas. Were there any talks with our Korean counterparts on this?

The outlook on the Hasan-Rajin railway project depends on two things: one is the end of the pandemic and isolation of the North and the second the sanctions regime. We are ready to develop trilateral cooperation, and Russia at various stages was looking into trans-Korean railway and gas pipelines and power lines, but that requires the end the of pandemic and lifting of sanctions.


Korea secured some 11.2 trillion won ($9.46 billion) worth of shipbuilding contracts with Russia since 2017, including ice-breaking LNG carriers, Where is this cooperation headed in the near future?

The Northern Sea Route is a major strategic endeavor that includes building a new ice-class fleet, in which Korean companies are already participating, including Hyundai Heavy Industries. But what we need [more from now] is to build more bulkers, container ships and other ships of ice-class. We have a clear target set by President Putin to exceed 100 million tons of cargoes transported by the route by 2030.


Is Putin focusing on developing the Far East and the Arctic more than ever?

The Far East and the Arctic regions are 56 percent of the Russian territory. More than half of our natural resources are there, and we’ve been developing the areas for at least 390 years — our first Far Eastern city was set up in 1632. The Russian Far East is where Russia connects to Korea, and I believe that President Putin believes, as I do and as many people do, that the Asia Pacific is the most important region in the world right now where all the growth is happening and the future is being built.


Russia’s interests in the Arctic are often portrayed in the international media as hostile, defensive or threatening. What are your thoughts on such assessments?

Sometimes the media tends to produce images that steal imagination. Does Russia have a strong military? Absolutely, everywhere — north, south, east and west, we are very secure and very well protected. Does Russia see the Arctic as a place for military focus? Not at all. Russia just has the largest Arctic area in the world, at least 50 percent of the area. Out of 10 cities above the Arctic circle with population of over 100,000 people, six are in Russia. People live in the Arctic, this is a fact.

The Arctic is getting politicized because a strong group of countries are Arctic countries, of which the biggest are Russia and the United States. Some Western media would like to show Russian submarines rather than how 19 indigenous Arctic communities live in Russia. They are beautiful people, some of whom still herd deer in the Arctic, live in huts made with deer skins, wear traditional clothes and cook over traditional stoves but at the same time have mobile phones and modern medicine. There is a town that is located on the 180 degrees longitude, which means that in that town, there is a point where you can move from today into yesterday. Once the pandemic is over, I would like to invite more Koreans to visit the Far East.