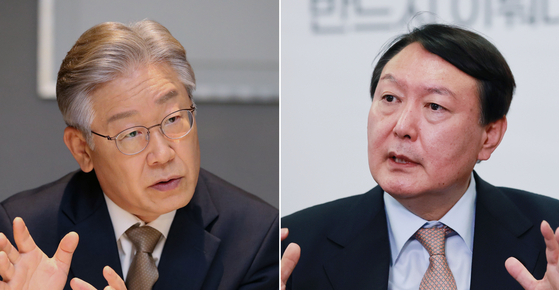 
The main opposition People Power Party's (PPP) presidential candidate Yoon Seok-youl wasted no time after his nomination Friday to call for an independent counsel probe into the Daejang-dong development corruption scandal, a hot-button issue which could potentially harm the prospects of his rival, the ruling Democratic Party's (DP) presidential candidate Lee Jae-myung.

Speaking in a media interview on Monday, Yoon went on the offensive against Lee, saying that he supported simultaneous independent counsel probes into the allegations surrounding the Daejang-dong development in Seongnam, Gyeonggi, and the ownership of the companies that raked in outsized profits from relatively small investments in the project.

"Let's find out [the truth] properly, through an independent counsel probe," Yoon said in the interview.

Controversy over the development project's profit distribution scheme, which began over allegations of business favors allegedly received by Kim Man-bae, the owner of Hwacheon Daeyu — a small asset management company which reaped a profit of 57.7 billion won ($48.7 million) on an investment of 49.95 million won, or a 1 percent stake in the project — has since engulfed domestic politics and implicated a number of people involved in the project, some of whom are Lee's acquaintances.

Prosecutors on Thursday obtained arrest warrants for Kim and lawyer Nam Wook, owner of Hwacheon Daeyu affiliate Cheonhwa Dongin No. 4, charging them with committing breach of trust and bribery under the Act on Special Economic Crimes.

They also indicted Yoo Dong-gyu, the public company's former acting president, on Nov. 2, also on breach of trust on top of the initial bribery indictment served by prosecutors on Oct. 21 on the suspicion that he engineered the profit distribution setup to favor Hwacheon Daeyu and its affiliates.

Kim is a former journalist who interviewed Lee in 2014, when he was Seongnam's mayor, while Yoo is a former aide to Lee who worked on the candidate's successful Seongnam mayoral and Gyeonggi gubernatorial campaigns.

In another interview on Monday, Yoon implied that Lee had committed a breach of trust against Seongnam and the city's development corporation, saying, "The mere fact that the project was set up [in that way] determines that a breach of trust occurred.

"If I was still the prosecutor general, the probe would have been wrapped up already," Yoon said.

During an Oct. 18 parliamentary audit of the Gyeonggi provincial government, Lee said that though he had overseen the project's design, he also ordered a fixed profit distribution scheme to prevent developers from excessively benefitting from their investments.

However, Lee's argument had not stemmed calls from the PPP for an independent counsel probe into the development, which the DP has rejected as a waste of political energy.

Speaking at a party election committee meeting at the National Assembly Monday, Lee congratulated Yoon's nomination as the PPP's presidential candidate, but argued that the political discourse leading up to the March election should focus on the economy and people's welfare.

"While cleaning up past corruption and punishing criminal activities are both important, we should look beyond [those issues] and focus on people's lives," Lee said in his remarks.

In an apparent counter to Yoon's calls for an independent counsel probe, Lee challenged the PPP candidate to a "one-on-one discussion on the country's future."

Ignoring Yoon's request that he submit to a special counsel probe, Lee said, "I would like to create an occasion where we can show people through a serious debate who would make the better custodian of the country's future — where we can focus on giving people hope for the future, and not despair over the past."