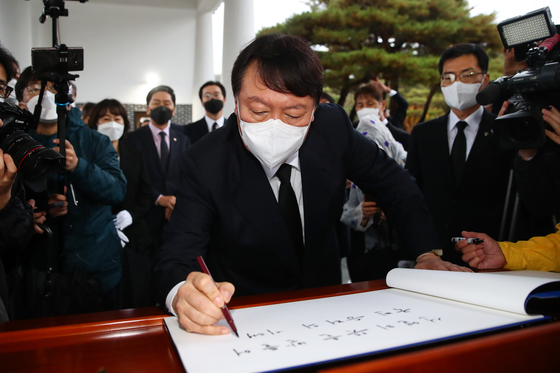 Yoon Seok-youl, the presidential candidate for the main opposition People Power Party (PPP), signs the guest book at the Seoul National Cemetery in Dongjak District, southern Seoul, Monday morning as his first official activity as the PPP’s presidential candidate. He wrote: “I will open an era of national victory by upholding the will of the ancestors.” [NEWS1]

Support for Yoon Seok-youl, the presidential candidate for the main opposition People Power Party (PPP), surged over 10 percentage points from the previous week, according to a poll Monday, a bounce after the former prosecutor general’s primary victory.

Yoon received 43 percent support, according to the latest survey by the Korea Society Opinion Institute (KSOI) of 1,009 adults nationwide over Friday and Saturday, jumping 10.6 percentage points from the previous week.

In a hypothetical two-way race between Yoon and Lee, the score was 47.3 percent for Yoon and 35.2 percent for Lee, according to the survey. In a survey released on Nov. 1, the candidates were neck-to-neck in a two-way match-up, with Yoon receiving 36.6 percent and Lee 36.5 percent.

The latest KSOI survey had a margin of error of plus or minus 3.1 percentage points and a 95 percent confidence level.

Yoon’s surge in popularity is a so-called convention bounce following the PPP’s primary race Friday, in which the former prosecutor general received 47.85 percent of ballots cast over four days by party members and the general public. His competitors, including the PPP primary runner-up Rep. Hong Joon-pyo, accepted defeat on the spot in a sign of unity of the conservative party. Hong actually won more votes from the general public than Yoon.

In contrast, former Gyeonggi Gov. Lee Jae-myung, who narrowly defeated former Prime Minister Lee Nak-yeon in the DP primaries last month, did not get much of a bounce after his party’s convention. His runner-up contested the primary results and only accepted defeat four days later.

Yoon visited the Seoul National Cemetery in Dongjak District, southern Seoul, with the party leadership including PPP chairman Lee Jun-seok as his first official activity as presidential candidate. He did not visit any former presidents' graves.

Yoon later headed to the National Assembly and attended a meeting of his party’s supreme council for the first time, met with the parliamentarians’ society and disbanded his primary campaign.

The PPP is expected to court Kim Chong-in, former interim leader of the PPP, to lead the PPP's election campaign committee. However, Kim told Channel A Monday that he has not yet received any offer from Yoon about taking such a role.

Pointing to Yoon’s losing by a margin of 11 percentage points in votes from the general public in the primaries, Kim said, there is a need to “objectively analyze what that means” especially when forming the election campaign committee.

Hong, despite quickly accepting defeat in the primaries, drew the line at taking part in the PPP’s election campaign committee.

In a ceremony held Monday to disband his primary campaign attended by some 300 youths in Yeouido, western Seoul, Hong repeated that he was “not taking part in a corrupt presidential election.”

Hong on Sunday said his role was over after losing the primaries.

“There are four months left, and I am very worried about what changes will come,” said Hong, warning "probably one of the two people will have to go to jail if they lose the election,” referring to presidential candidates Lee and Yoon, who have been both linked to scandals and allegations undergoing prosecution probes.

Lee, in turn, offered his congratulations to Yoon for being nominated in a meeting of the DP election campaign committee at the National Assembly Monday and proposed to hold “sincere one-on-one talks with candidate Yoon to discuss the future of this country.”