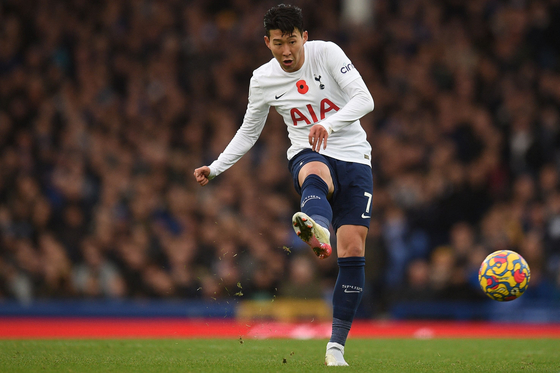 Tottenham Hotspur's Son Heung-Min kicks the ball during a Premier League match against Everton at Goodison Park in Liverpool on Sunday. [AFP/YONHAP]

Spurs walked away with a 0-0 draw against Everton at Goodison Park in Liverpool on Sunday, a significant improvement on the 3-0 loss to Manchester United that ended the Nuno era, but not quite the emphatic start that the new manager might have hoped for.

Korean forward Son Heung-min was as ineffective as any other member of the Spurs squad, sending his one good opportunity far wide of the goal.

Goodison Park holds difficult memories for the striker. It was there in 2019 that a rough tackle on Andre Gomes left the Everton midfielder requiring surgery and Son with a red card.

The card was later overturned, but the incident left Son devastated and Everton fans were quick to capitalize on the opportunity to remind him of it on Sunday, jeering every time the Korean striker touched the ball.

But while Tottenham had to settle for a draw, they did get to extend their unbeaten streak at Goodison Park to nine Premier League visits. Everton, meanwhile, have only managed to beat Spurs once in their last 18 Premier League games.

Conte will now have some time to regroup as the Premier League pauses for another international break as qualifiers for the 2022 Qatar World Cup continue.

Son will be headed back to Korea to join the Taeguk Warriors for two fixtures over the next 10 days. Korea will first take on the United Arab Emirates in the final game of the first leg of the third round of Asian qualifiers at Goyang Stadium in Gyeonggi at 8 p.m. on Thursday.

Following that game, the Taeguk Warriors will jet off to Qatar to kick off the second leg, with the first match against Iraq at Thani Bin Jassim Stadium in Doha, Qatar on Nov. 16.