Korea and Chile sign an MOU to cooperate in hydrogen

Korea and Chile sign an MOU to cooperate in hydrogen 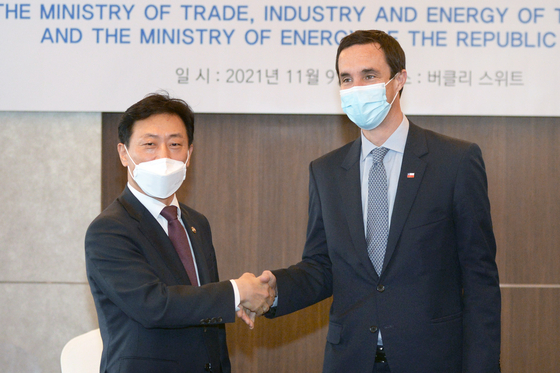 Korea's Vice Industry Minister Park Ki-young held a signing ceremony with Chilean Minister for Energy and Mining Juan Carlos Jobet for the agreement, which calls for exchanging technologies of producing, storing, transporting and using clean hydrogen, according to Seoul's Ministry of Trade, Industry and Energy.

"The combination of Korea's technologies and experiences, and Chile's renewable energy resources is expected to help establish an economical hydrogen supply network and expand low-carbon hydrogen trade markets," the ministry said in a release.

Korea has been pushing for an energy transition policy based on hydrogen, a clean alternative to fossil fuels, in accordance with the country's goal to go carbon neutral by 2050.

Chile also pledged to become a leading clean energy supplier in the world based on its vast renewable energy resources, and has been working to produce green hydrogen and to deepen international cooperation.

"Vice Minister Park voiced hope that more South Korean firms can take part in energy projects in Chile so as to help secure a stable supply channel of such key resources as lithium," the ministry said in a release.