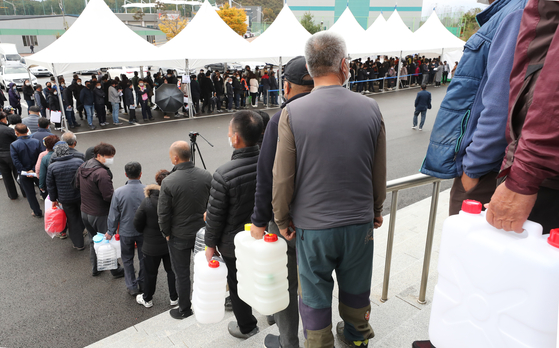 Large crowd lines up in front of a gym in Iksan, North Jeolla, on Tuesday waiting to get urea solutions for their diesel vehicles supplied by Aton Industry, the regional urea solution producer. [YONHAP]

The Blue House says it's trying to get tons of urea through Chinese customs to help Korea with its shortage.

“There are currently more than 19,000 tons [of urea] waiting for [approval] at China’s General Administration of Customs,” said Koo Yun-cheol, Minister for Government Policy Coordination. “We are trying to get [customs approval] as quickly as possible.”

Koo told lawmakers on the National Assembly’s National Policy Committee Tuesday that the 19,000 tons will help ease the shortage of diesel exhaust fluid (DEF), needed by diesel cars and trucks to run, which is based on urea.

Koo also said the government is discussing building up Korea’s own urea production to reduce its dependence on Chinese imports, including the possibility of subsidies.

Korea stopped producing urea, which is extracted from coal, in 2011 and has depended supplies from China and, to a lesser extent, Indonesia and Qatar.

President Moon Jae-in asked the public not to panic.

“The government is focusing all its diplomatic capacity on securing additional supply [of DEF],” Moon said during a cabinet meeting Tuesday.

The government said Tuesday it will come up with an “action plan” to use the Korean military’s 210 tons of urea water solution, the main ingredient of DEF.

“[The government] is doing its best to find alternative imports,” Moon said. 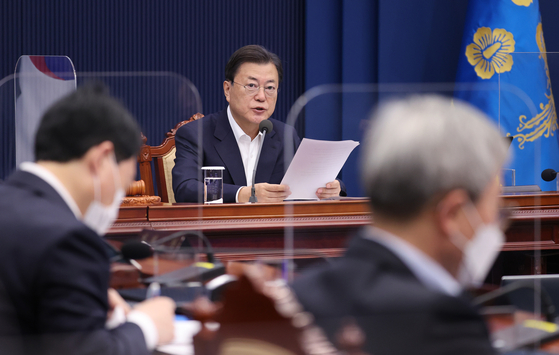 President Moon Jae-in holding a cabinet meeting at the Blue House on Tuesday where it again stressed that the government is doing all it can while asking the public not to panic. [YONHAP]

Moon ordered the government to do a survey of other vital materials Korea imports to prevent a similar crisis in the future.

He said the DEF crisis stemmed from disruption in the global supply chain, logistical bottlenecks and the transition to a low-carbon economy.

“It is a risk factor that could happen anytime,” Moon said. “We need to review broadly raw material supply problems caused by the changing global supply chain,” Moon said.

Last month, China decided to tighten its exports of fertilizers, including urea, as it struggled with coal supplies.

According to the Korea International Trade Association, 66 percent of Korea's imports of urea water solution last year came from China, amounting to 550,000 tons.

On Tuesday, the government said it was investigating urea trading by 73 companies. One of those companies was found to have violated the government’s order against hoarding.

Hoarders can face a fine of up to 100 million won or a prison sentence of up to 3 years.

The government also found 3,000 tons of unprocessed urea being held by a private importer.

Of the 3,000 tons, 2,000 tons is for vehicle use, and the rest for industrial purposes including use in power plants.

2,000 tons could be processed into roughly 6 million liters of DEF.

The government said the private importer agreed Tuesday to process 700 tons of the urea into DEF, which would only take a day, and eventually 1,300 tons more.

The government stressed there is enough DEF supplies for emergency uses. Among 6,700 fire trucks, 5,400 are estimated to use DEF.

The government said it has a stockpile for emergency uses that could last three to four months.