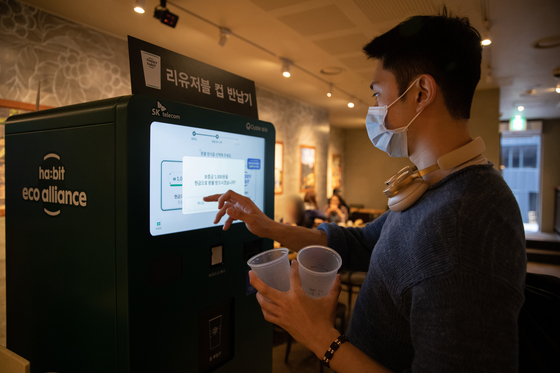 
Starbucks Coffee Korea phased out single-use plastic and paper cups in few Seoul branches, but the green initiative left customers muddled and miffed as they found themselves struggling with messy cups and a diabolical return system and wondering whether, after all is said and done, the grand plan will do any good at all.

Stores will only serve drinks in coffee mugs, tumblers brought by customers, or the cafe’s reusable plastic cups. The reusable cups are plastic but sturdier than single-use cups and can be used 70 to 100 times when washed.

A 1,000 won (85 cent) deposit is charged for each cup, which is refunded when customers return them to a machine at the 12 branches. Customers can choose to get the refund in cash, Starbucks loyalty points or Happy Habit loyalty points.

Long lines formed during lunch hours as the system the was rolled out, when office workers from nearby companies piled in to have coffee and return the cups.

“I had coffee with two of my colleagues, and it took us quite a bit to return all three cups,” said Jeon Yeong-min, an office worker in her 30s. “The idea is nice, but I don’t think I’ll be coming to Starbucks when I’m having coffee with a lot of people or ordering for our whole team when having team meetings.”

Starbucks baristas each took about a minute to explain the new policy when customers were making orders. A Happy Habit employee sat next to the return machine, stepping in to help customers. The employees will be at the 12 branches through Wednesday.

Language options in Korean, English and Chinese are available on the machine. The collected cups are sent to a cleaning company to be washed and sterilized. 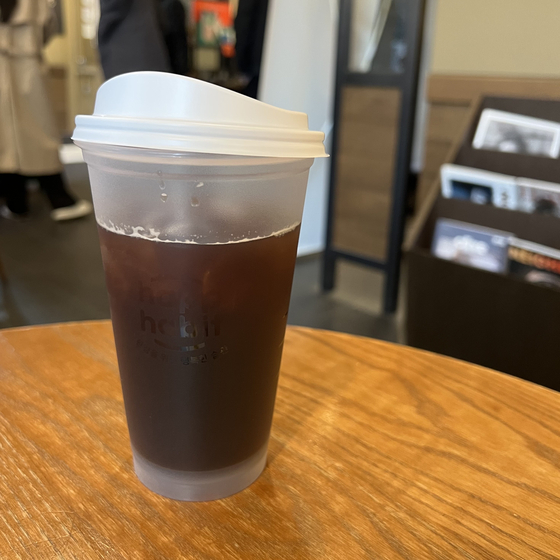 A coffee is served in a reusable cup at Starbucks Coffee Korea's Seoul City Hall branch in Jung District, central Seoul. The cups can be reused after being washed, but the lids are single-use plastic. [LEE TAE-HEE]

“I actually didn’t mind because I thought it would be good for the environment,” said a woman in her 40s about the policy. “But the cups still have plastic lids on them, and it goes against the initial idea.”

The lids are the same lids customers receive for single-use take-out cups and aren't reusable.

A spokesperson for Starbucks Coffee Korea said the lids are single-use plastic because reusable lids are thinner and hard to be used multiple times. However, the company recycles the lids.

Another hassle is washing the cups. The reusable cups need to be rinsed before being returned, and the few options for customers are the cafe’s water fountain, a nearby bathroom, or cleaning it at home and bringing it back later.

The 12 branches will soon have a cup-washing station in the cafe to make the process easier, but a specific date wasn’t given.

The policy follows its goals to cut plastic waste. In July, Starbucks Coffee Korea stopped giving out single-use plastic cups at four Jeju branches. A similar program was implemented from March through May in Seattle.

There is room for improvement, and the company plans to better its program.

Single-use plastic cups will be eliminated from all Jeju Starbucks branches by the end of the year. All branches in Seoul will not serve in disposable cups by next year. By 2025, no branches nationwide will carry disposable plastic cups.