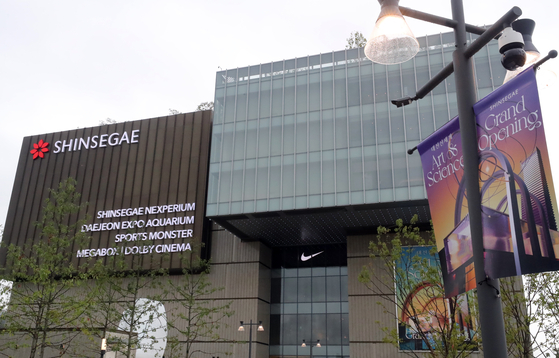 The Shinsegae Department Store in Daejeon that opened in August [NEWS1]

Net profit jumped 21,921 percent on year in the July-September period, the company said. Sales were up 37.3 percent to 1.67 trillion won, a record high for a third quarter and beating a 1.45-trillion-won market consensus.


A new branch in Daejeon performed well. Sales from Aug. 25 through September were 40 percent higher than its sales target for the period.

A spokesperson for Shinsegae said that it plans to “continue to report good earnings in the fourth quarter based on the strengthening of offline stores, growth of our subsidiaries and recovery of Shinsegae Duty Free.”

“Recovery of outdoor activities and the season to buy outwear [in winter] are expected to lead growth at its department stores in the fourth quarter,” said Oh Li-na, an analyst at eBest Investment & Securities.“