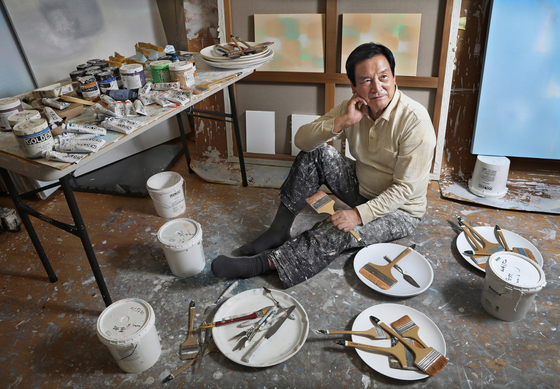 
A solo show of 80-year-old artist Suh Seung-won at PKM Gallery in central Seoul, which wrapped up last month, attracted an unexpectedly high number of young visitors after BTS’s RM, whose real name is Kim Nam-joon, uploaded a photo of himself beside one of Suh’s paintings on the K-pop boy band’s official Twitter account.

It is no surprise that RM, who is not just an art collector but also an earnest supporter of Korean modern artists of the 20th century, takes interest in Suh, because Suh has been a pioneering figure in Korean geometric abstraction and was at the center of experimental art scenes in the 1960s and 70s. He was one of the founding members of two important alliances of artists in Korean history — Origin Group and the Avant-Garde Association often called AG. 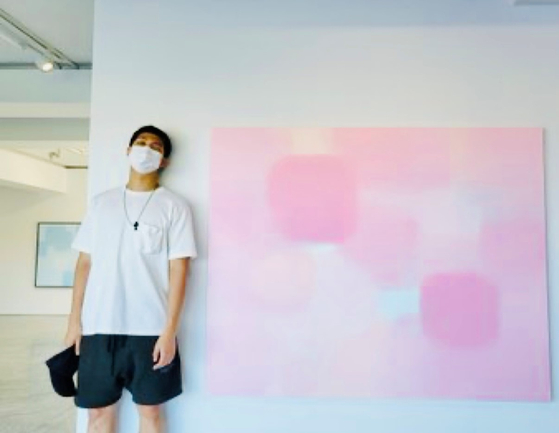 
After dansaekhwa, or Koran monochrome paintings, found itself in the limelight on the international art scene, those alliances, of which many dansaekhwa artists are part of, are attracting attention. Suh is often categorized as a dansaehwa artist, as he was one of five artists invited to participate in the iconic exhibition “Five Korean Artists, Five Kinds of White” at Tokyo Gallery in Japan in 1975, which is said to have been a critical moment in development of dansaekhwa.

In order to shed new light on Korean artists’ alliances in the 1960s and 70s, the Solomon R. Guggenheim Museum in New York, in collaboration with Korea’s National Museum of Modern and Contemporary Art (MMCA), will hold an exhibition “The Avantgarde: Korean Experimental Art of the 1960s to 1970s” in 2022. Suh is one of the artists who will be featured in the exhibition.

The Korea JoongAng Daily sat with Suh in his studio in Mok-dong, western Seoul, last month. The following are excerpts of the interview. 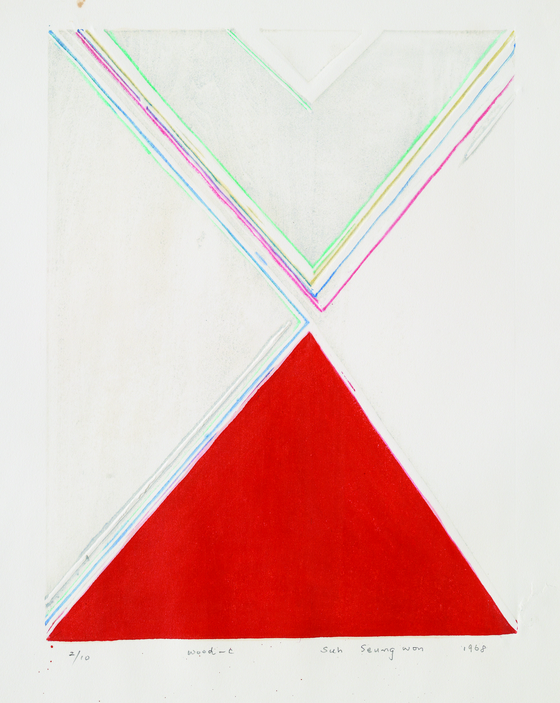 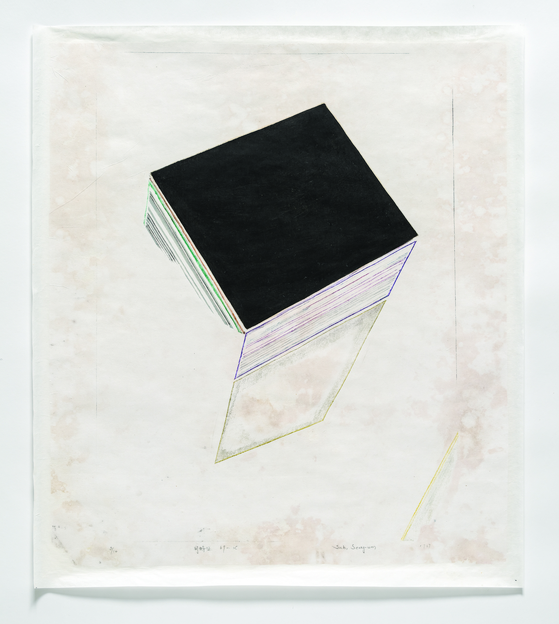 Q. Origin Group was founded in 1962 by very young artists including youself (who was only 21 years old at the time). Your group proclaimed defiance of the older generation’s art influenced by Art Informel and Abstract Expressionism movements in the West. Why?

A. When I entered Hongik University, the art world was being dominated by paintings that expressed the trauma of the Korean War (1950-53) in black or dark red colors without forms in the styles of Art Informel and Abstract Expressionism. We, young students, wanted to do new art different from them, despite the frowning professors.
We are the generation that actively participated in the 1960 April Revolution that led to President Syngman Rhee‘s resignation. In my view, the revolution was triggered not only by the corruption of the Rhee government but also by the public's demand for new democratic order. After the revolution, there were discussions about new order not only in politics but also in arts and culture. In addition, there were discourses about our identity, in other words, what is Korean? With such background, I founded Origin Group with other eight artists.
As a new order I pursued geometric, logical and intellectual painting in contrast to the chaos, randomness and tragic emotions expressed by Art Informel painting.


Compared to your current works, your early paintings in the 1960s have strong primary colors.

They are based on obangsaek (Korean traditional color spectrum that consists of black, red, blue, white and yellow, which respectively symbolizes the north, south, east, west and center.) As I said, what is Korean in art emerged as an important topic immediately after the April Revolution. At that time, I was doing the part-time job of painting dancheong (which refers to Korean traditional decorative coloring on wooden structures) at Buddhist temples. So, I applied the colors of dancheong to my abstract paintings. The colors, in particular the bright yellow color, shocked the public and critics, who were only familiar the with dark colors of the paintings in the Art Informel style.


Then, you moved to subdued colors, while keeping geometric forms in the 1970s. Why?

I grew up in a hanok (Korean traditional house) in Seoul and you know the doors and windows of hanok consist of wooden frames and changhoji (a kind of Korean traditional paper for windows) on the frames. Changhoji, by filtering light, gleams in mystic and delicate shades of color, while letting the whole room be filled with diffused gentle light creating a warm feeling, so you can sit anywhere in the room. On the other hand, modern glass windows do not filter light, so the light that comes through them divides the room into the brightly-lit, warm parts and shady, cool parts. Inspired by the light filtered by changhoji and other filtering in Korean culture, I moved to filtered colors — neutral tones.

You were also inspired by chaekgeori, or Korean traditional still-life paintings of bookshelves.

Yes, the unique compositions and perspectives of chaekgeori fascinated me and their influence is visible in the layout of geometric forms in my paintings. I was also inspired by the grid structures of the wooden frames of hanok’s doors and windows. 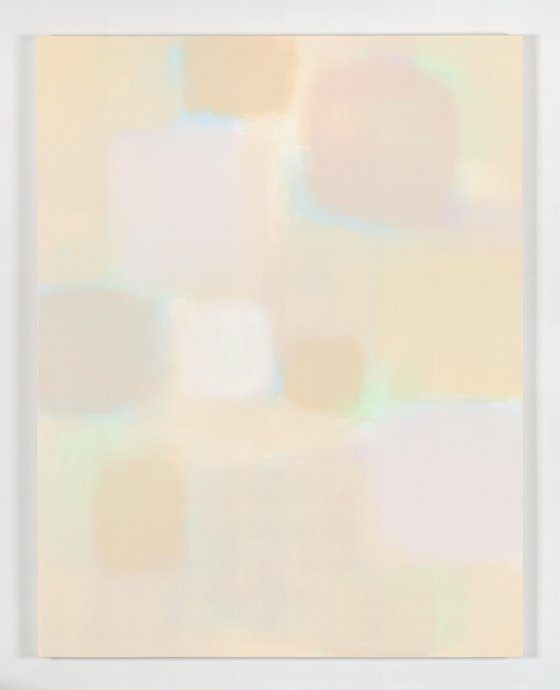 
For over five decades, you have named your paintings “Simultaneity.” What is “simultaneity”?

It is the simultaneous and balanced manifestation of the visible and invisible, through the visualization of the invisible such as spirituality. In my painting, I pursue the rigorous formative order and harmony of spaces, while carrying the traces of the act of painting over time and my mind (during the act) in the painting simultaneously. It is a concept I have been persistently exploring.


In your recent paintings, the geometric forms have disappeared and bright pastel tone colors dominate.


Yes. Twenty years ago I began to deconstruct my rigorous structural forms. To me, deconstruction is associated with nirvana or the state of freedom from all ideas and thoughts (in Buddhism). As I get older, I’m becoming more meditative. To express such mind, I apply the technique of sfumato (the technique used in Renaissance paintings such as the famous ‘Mona Lisa’ that produces soft, imperceptible transitions between colors and tones through fine shading) in my abstract paintings. The technique blurs the borders between forms and (background) spaces in my paintings. Forms become spaces and spaces become forms.

As for colors, many of them are nostalgic to me, a feeling which gets stronger as I get older. The pink colors were inspired by the peach trees in the backyard of the house I grew up in and the Korean traditional nail coloring made with balsam flower petals, which has a very delicate red color. My mom used to color my nails in that way when I was very young, because she didn’t have a daughter. (In times gone by in Korea, mothers would dye their young daughters’ nails with balsam flower petals, which was not only for beauty, but also believed to scare away evil spirits who feared the color red.) 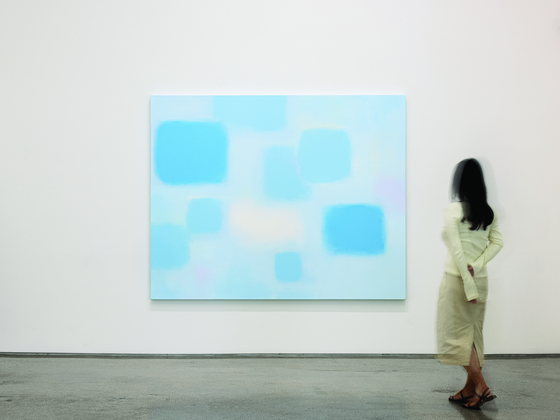 ″Simultaneity 21-312″(2021) by artist Suh Seung-won on view at his solo show at PKM Gallery that wrapped up in October. [PKM GALLERY]


Many people say your paintings in the 2000s make them feel calm, peaceful and meditative.

Yes, that’s what I've been pursuing with my recent paintings. For that, the artist’s mind should be composed, because the paintings reveal the artist’s inner self. So, I never contact anyone while I'm painting. I have no assistant. I wait in front of the empty canvas for a while and after several hours in the spiritual state of selflessness I begin to paint. Sometimes after waking up from that state, even I am surprised by the complete painting.