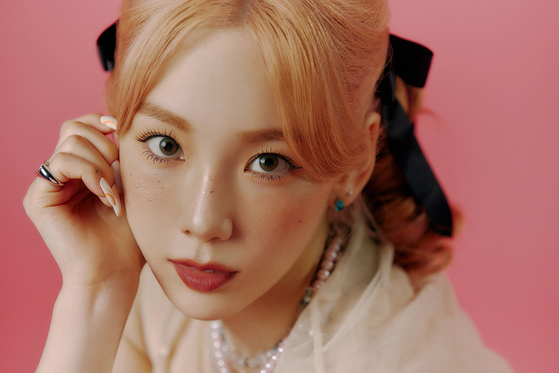 
Two K-pop idol stars are embroiled in real estate-related controversies, and it turns out that their greatest critics are their very own fans.

Scandals related to celebrities' finances are not out of the ordinary, but fans today are at the forefront of demanding the truth.

In late October, local news channel YTN reported that a famed girl group member was one of the victims of large-scale real estate fraud in which a realtor group sold undevelopable plots of land to clients. The group misled over 3,000 people claiming it had insider information that regulations would soon be lifted and the land would become developable.

According to the report, the girl group member bought a plot of land in Hanam, Gyeonggi, which is part of a forest reserve that is legally protected from development except for military or public purposes. Although that means no building can be constructed on it, the member reportedly paid 1.1 billion won ($931,900) in 2019 for the land which the realtor group had bought for 400 million won just three months prior. 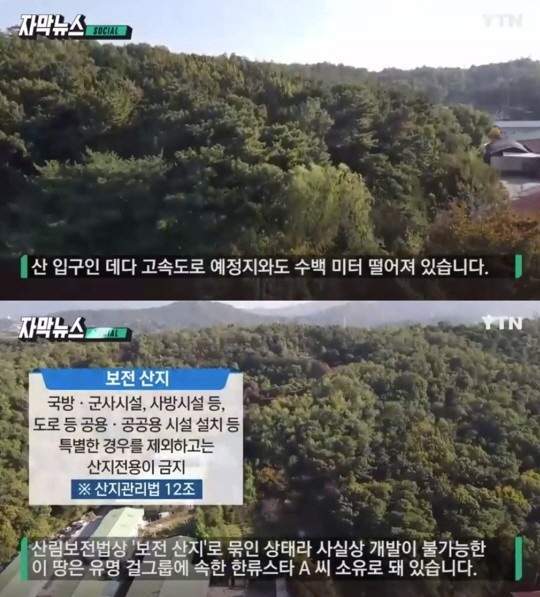 In 2019, Taeyeon purchased a plot of land in Hanam, Gyeonggi, which is part of a forest reserve that is legally protected from development except for military or public purposes. Although no building can be constructed on it, she reportedly paid 1.1 billion won ($931,900) for the land. [YTN]


Rumors ensued that the celebrity in question is Taeyeon of Girls' Generation, and that she bought the land as part of real estate speculation based on false insider information. Speculation is a real estate term which refers to purchasing property with the expectation that the value will rise, in hopes of reselling it at a higher price later. In Korea, the term has a connotation of being based on undisclosed information.

Taeyeon immediately responded to the accusation with a statement on her Instagram, confirming that she was the girl group member in question but asserting that the purchase was not speculative.

"It was always my dream to create a home for my family closer to where I work [in Seoul]," she wrote. "My family agreed to buy the land, and both of my parents checked [the land] with their own eyes. [...] I would be insane to speculate." 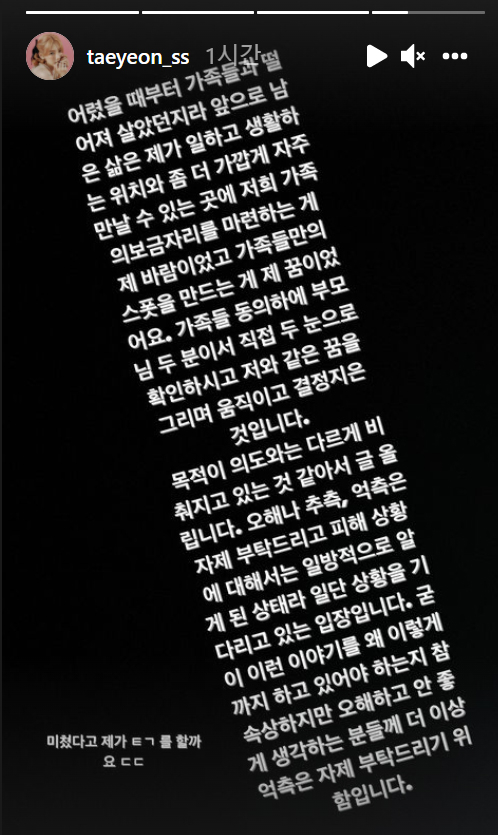 Taeyeon wrote on Instagram asserting that her purchase was not speculative buying, but to build a house for her family. Speculation refers to purchasing real estate with the expectation that the value will rise, in hopes of reselling it at a higher price later. [SCREEN CAPTURE]


However, the statement actually worsened the public sentiment toward her and led to more questions about why she had bought undevelopable land to build a house for her family. The general public and fans alike are pointing out that purchasing real estate based on insider information about future development is the definition of speculation. Taeyeon's statement about her intentions to build a house on that land unintentionally became a sort of confession that she expected regulations on the forest reserve to be lifted in the near future.

"The scammers indeed deceived the victims, but I doubt the buyers were planning to keep the land undeveloped either," said Kim Nam-geun, an attorney specializing in real estate policy.

"Taeyeon was lied to, but allegedly the lie was that regulations would soon be lifted. Under its current status as a protected forest, it's evident you can't build a house there. Even if she planned to live there [without reselling it], it's still speculative buying, as the purchase was based on undisclosed information. Other victims most likely expected the price of the land to rise once construction was authorized. Without such expectation, who would buy a forest for a price that high? I believe the public is considering these circumstances and criticizing Taeyeon's intentions from an ethical perspective."

The plot of land purchased by Taeyeon [JTBC]


"The only type of building potentially allowed on a forest reserve is a small farmer's hut," said a real estate researcher who wished to stay anonymous. "I can't say for sure if she received insider information, but then did she purchase the land without even checking if she can build anything on it? Unless she wanted to live with her family in a hut, her statement makes little sense."

Taeyeon has not released any follow-up statements as of Tuesday and local fans are urging the singer to come clean and apologize.

"Even as a fan, I can't defend this," reads a comment on a related news article online. "I'll be disappointed if she keeps making excuses."

"I feel sorry that she was scammed, but she believed the [realtors'] lie and made that decision," reads another comment. "Just admit and apologize." 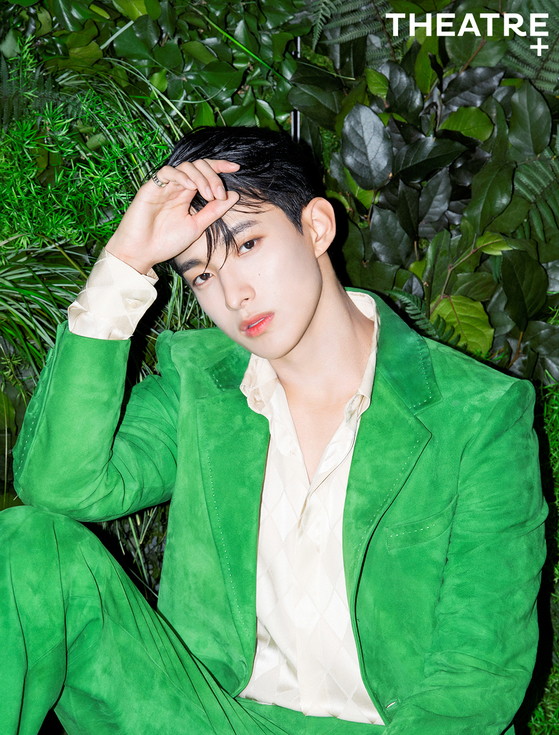 
Meanwhile, DK, also known as Dokyeom, of boy band Seventeen is in the middle of his own real estate controversy. The singer purchased a five-story building in Gangnam District, southern Seoul, for 6.85 billion won in August. Initially praised by fans as the epitome of "young and rich," DK soon faced suspicion when it was revealed that he did not buy the building in his name, but under a corporation named Lord.k Co., Ltd.

According to a certified copy of corporate registration, DK founded Lord.k Co., Ltd. in July under his real name Lee Seok-min and owns 100 percent of the shares. The registration also lists an ordinary residential house in Anyang, Gyeonggi, as the company's address. Fans are now questioning if DK established a company just to buy the building, since corporations have an advantage over individuals in terms of loans and taxation.

"Establishing shell companies to buy real estate is actually a common strategy," said Shim Gyo-eon, a real estate professor at Konkuk University. "If you purchase as a corporation, you pay much less acquisition tax, property tax, inheritance tax and such. It's much more advantageous than buying as an individual. I believe DK simply made a decision to reduce taxes. It may be an expedient, but it's not illegal per se." 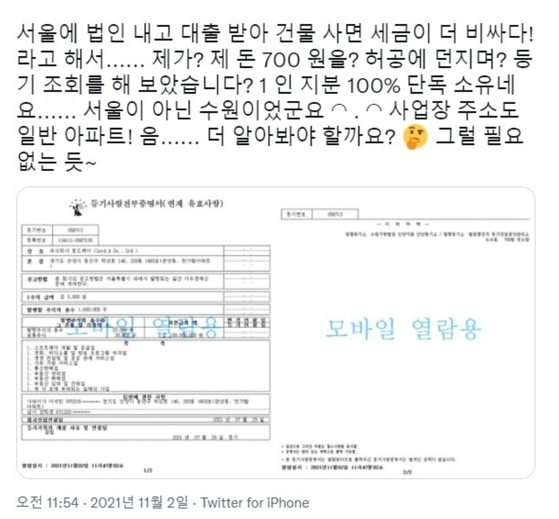 One fan obtained a certified copy of corporate registration for DK’s company Lord.k Co., Ltd. and posted it on Twitter to suggest that it is a shell company, founded for the sole purpose of evading higher tax rates. [SCREEN CAPTURE]


One fan went as far as obtaining a certified copy of corporate registration, which anyone can access at local or online registry offices, and posted it on Twitter.

"I wasted my 700 won to get this certified copy," the fan wrote. "[DK] owns 100 percent of the shares [...] and the business's address is a regular apartment! I think that's enough said."

"DK's company is probably only in name, since its business is all over the place according to the registration: software development, film production, management consulting, telemarketing, real estate affairs and more," said attorney Kim. "Corporations do enjoy significant tax benefits compared to individuals, so if DK's company isn't in business at all, it may be considered tax evasion and be subject to an investigation by the National Tax Service."

DK has not responded to the allegations and his agency Pledis Entertainment could not be reached for comment.

Fans of DK and Seventeen, dubbed Carats, have launched a Twitter campaign with the hashtag #SeventeenExplain (translated) and are expressing disappointment. Especially with Seventeen's online concert "Power of Love" starting Sunday, Carats are demanding answers.

"Please say something, DK," reads a post on an online community with approximately 1,300 likes.

"Are you going to act as if nothing happened? This is wrong. Please think of the fans who have trusted you. You're being so selfish while Seventeen is being criticized as a whole. True fans lead you to the right path, not blindly overlook your wrong decisions." 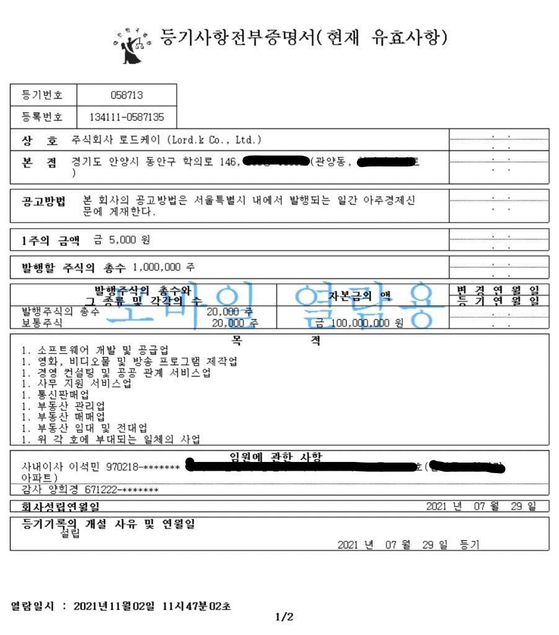 
While the two controversies remain open to legal and moral interpretation, what's particularly notable is that the fans are the people most ardently seeking answers. Considering that fans, especially of boy bands, are predominantly in their teens and early 20s, their sensitive reaction to real estate issues is quite surprising.

"You may think, 'What do those teen fans know about real estate to be this angry?'" said Kwak Geum-joo, a psychology professor at Seoul National University. "But the entire country is extremely sensitive toward real estate issues as prices have skyrocketed in recent years. Teenagers today probably hear their parents lament, 'If I bought that land or house a few years ago, the price would have at least tripled by now' more than any generation.

"Those teens are growing up seeing house prices rise by hundreds of millions of won each year. So even teenage Koreans feel a sense of deprivation as they look at high house prices, and thus perceive real estate-related controversies as a serious issue. They feel strongly that speculation and expedients are unjust, even when it's done by the idol star they love."

A view of apartments in Seoul [NEWSIS]


Indeed, fans are not only criticizing the ethical aspect of DK's alleged actions, but also highlighting how similar incidents have been causing real estate prices to increase rapidly.

"In an era where the entire nation is anxious about the future, interest in real estate transcends age groups," said pop culture critic Kim Heon-sik. "Another factor is that K-pop fandom culture has grown more mature in general. Until a few years ago, fans were expected to unconditionally defend their favorite idol stars even when they committed a wrongdoing. But now it's the stars' very own fans who actively point out their moral shortcomings and ask for explanations.

"In a way, they're asserting their rights as fans, since a star's success is largely thanks to the fandom. It's an interesting phenomenon to observe and shows how proactive K-pop fans are nowadays. Fans will continue to speak up and demand answers, not only on real estate-related controversies but regarding any problem."