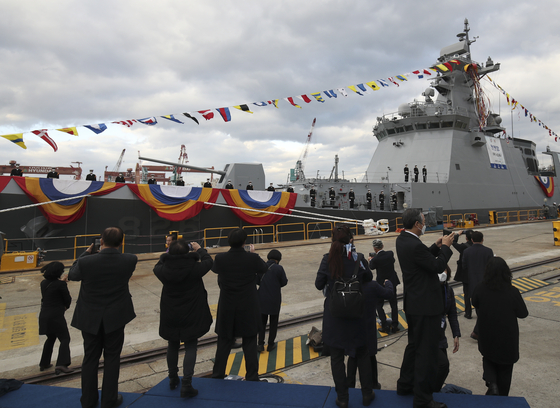 Families of fallen Cheonan crewmembers pose in front of the new Navy frigate Cheonan, which was launched at Hyundai Heavy Industries' shipyard in Ulsan on Tuesday. [NEWS1]


A group of survivors of the sunken Navy corvette Cheonan boycotted a launch ceremony Tuesday for a new Navy frigate named in honor of the sunken ship, in protest of the state communications commission's decision to not penalize a series of conspiracy videos about the ship's sinking.

Captain Choi Won-il and 34 other surviving crew members aboard the Cheonan at the time of its sinking decided not to attend the launch, held at Hyundai Heavy Industries' shipyards in Ulsan.

Although the former captain and the Cheonan's surviving crewmembers had planned on attending the launch of the new ship — a 2,800-ton Daegu-class frigate — even going so far as to buy train tickets to Ulsan, the survivors changed their minds after the Korea Communications Commission (KCC) decided on Oct. 28 not to take action against a series of YouTube videos that propagated conspiracy theories about the Cheonan sinking.

Although the South Korean-led multinational Joint Civilian-Military Investigation Group (JIG) concluded in May 2010 that the Cheonan sank due to a non-contact underwater explosion caused by a North Korean torpedo detonating close enough to the stern section of the hull to cause severe damage, conspiracy theories continue to circulate regarding the sinking.

The eight YouTube videos in question, which the Defense Ministry requested be deleted or blocked, claimed that the Cheonan was destroyed after running aground and being hit by a submarine and that it was not torpedoed because there was no trace of fire where the hull was breached.

Three out of five members on the KCC, who were appointed to the commission on the recommendation of the ruling Democratic Party's (DP) political bloc, decided that communications laws did not apply to the videos.

In a statement the day before the launch ceremony, the Cheonan Foundation, a group of surviving crewmembers and the fallen sailors' families, denounced the KCC's decision.

Captain Choi also on Monday uploaded a post on social media strongly criticizing the KCC's decision to not take action against the conspiracy videos and declared his refusal to attend the launch ceremony.

"Whose side is the KCC on, when the president himself has said that the Cheonan sinking was the work of North Korea?" the captain wrote in the post.

Although Defense Minister Suh Wook said in his remarks at the launch ceremony that the country had fulfilled its promise to "revive the Cheonan in remembrance of the sacrifice of the ship's crew," most of the original ship's crew was not in attendance to hear his words.

The KCC's decision has also come under fire from members of the ruling party.

In comments directed at the defense minister, DP lawmaker Kim Byung-kee said, "Isn't it appropriate for the Defense Ministry to express its disappointment with the commission's decision? The ministry should be working to prevent this kind of fake news from being spread online."