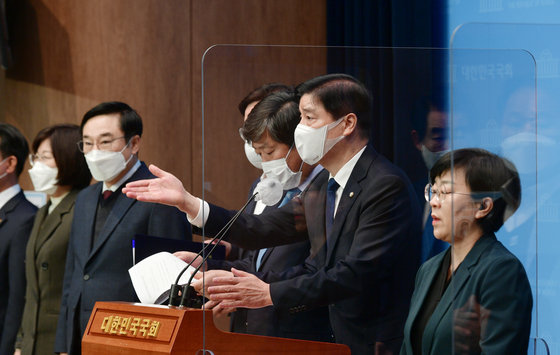 The proposal is to roll them out in January, two months ahead of the presidential election.

Yun Ho-jung, DP floor leader, said at the National Assembly Tuesday that the "With Corona" relief grants will help people get back to normal.

"We will try to include them in next year's budget and plan to roll them out as soon as possible when the new fiscal year starts in January," said Yun. He said that the DP will continue talks with opposition parties and the government so that discussions on the specific amounts, timing and financing "go smoothly."

Former Gyeonggi Gov. Lee has been pushing for additional Covid-19 relief payments to all Koreans and proposed that government shell out an additional 300,000 to 500,000 won per person.

He said the government's previous handouts of up to 500,000 won per person were too small if you consider Korea's GDP and compared to other countries in similar positions.

Lee pointed out that the government is expected to collect more tax revenues than initially expected this year, and there is a need to help people struggling due to the pandemic.

The Korean government has rolled out five rounds of Covid-19 emergency relief funds since the start of the pandemic, including two sets of universal grants for most individuals, the first in May 2020 and another in September.

The second round in September gave individual grants of up to 250,000 won to around 88 percent of the population, excluding the richest.

Rep. Park Wan-joo, head of the DP's policy planning committee, said that the "With Corona" relief grants are "not just a measure to stimulate consumption are meant for those who have endured the pain caused by Covid-19 and a subsidy for the purchase of quarantine items such as disinfectants."

Finance Minister Hong Nam-ki on Monday renewed his opposition to more grants, saying that targeted support is "more effective" and arguing that the government has already set the 2022 national budget.

While DP presidential candidate Lee claimed the additional cash handouts can be financed with additional tax revenues of an estimated 40 trillion won for this year, Hong countered that the government's budget plan already allocated 31.5 trillion won, meaning less than 10 trillion won in extra tax revenue will be available.

Prime Minister Kim Boo-kyum similar opposed more universal grants, calling them "realistically impossible" unless a supplementary budget is drawn up, which he said is not very feasible.

The DP estimates it will need 10 to 15 trillion won for its plan, lower than the amount proposed by Lee.

A group of local DP government leaders, including heads of county and districts offices, held a press conference at the National Assembly Tuesday calling for more grants.

In a Facebook post Tuesday, Yoon added, "Under the National Finance Act, when there is a surplus in tax revenue, it should be used first to pay national debt or to provide local financial subsidies," accusing the DP of playing politics with tax money.

A key Blue House official told reporters Tuesday, "I hope the ruling party and government will come to a wise conclusion while coordinating opinions [on relief grants]."