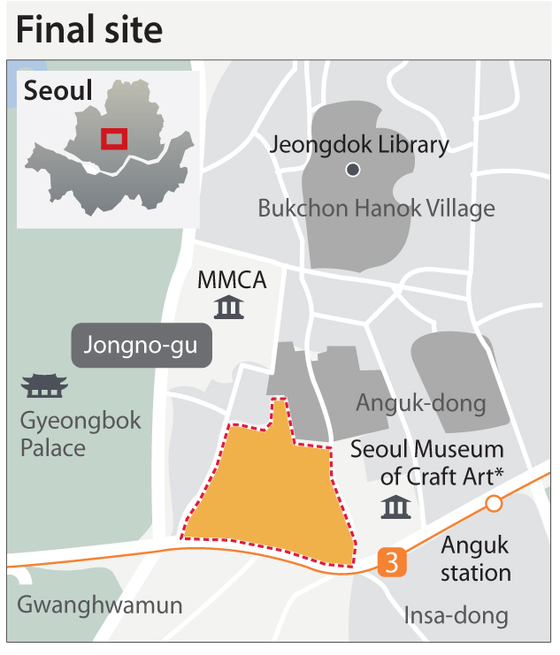 The so-called Lee Kun-hee Museum will be built on a Songhyeon-dong site in central Seoul, the Ministry of Culture, Sports and Tourism said on Tuesday.

The ministry said in a statement that a committee of government officials and outside experts concluded that the museum should be built on 9,787 square meters at Songhyeon-dong 48-9, whose total area is 37,141.6 square meters. The remaining areas will become public gardens.

The committee said the Songhyeon-dong site was easier to access for the public than the Yongsan site, and offered easier collaboration with workforces at nearby museums, including the MMCA. The committee expects synergy between the new museum and existing museums, galleries and other cultural facilities around the Songhyeon-dong site. Close to the site are Gyeongbok Palace, MMCA, Seoul Museum of Craft Art and Bukchon Hanok village.

The ownership of the Songhyeon-dong site is complicated. It is owned by Korean Air for now but is scheduled to be sold to the city of Seoul via the Korea Land and Housing Corporation (LH). The culture ministry and the Seoul city government have agreed to swap ownership of the Songhyeon-dong site with that of a site on state-owned land. The ministry and Seoul's city government will sign an agreement on Wednesday.

The ministry said it wants to open the so-called Lee Kun-hee Museum in 2027. The official name of the museum might be different, and the ministry has promised public hearings on the issue. In the second half of next year, the ministry will also start procedures to select an architect through an international competition

On April 28, Lee's family donated more than 23,000 pieces including National Treasures and famous modern art masters’ works from his extensive art collection to two national museums and some municipal museums in the provinces. But the government wants the works collected and displayed in a new museum.

Since then, more than 30 local governments expressed hopes that they could become home to the Lee Kun-hee Museum. They cited their relationships with the late Lee and a new museum’s economic and cultural effect on their areas, while complaining about the concentration of cultural facilities in Seoul.

Meanwhile, amid high public interest, the MMCA’s Seoul branch is holding a special exhibition of the donated Lee-Kun-hee collection until early next year.