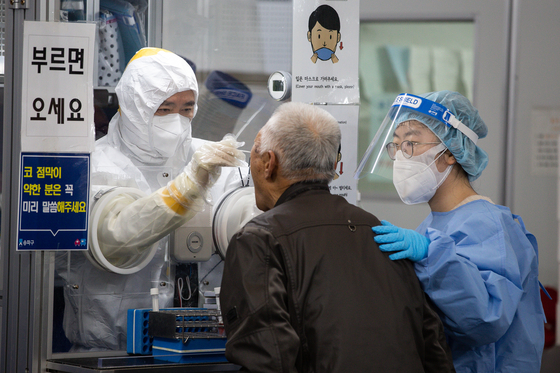 An elderly person receives a Covid-19 test at a public health center in Songpa District, southern Seoul, on Tuesday. [NEWS1]


The number of Covid-19 patients in critical condition reached a new high after two months on Tuesday, just a week after the country lifted most of its distancing restrictions.

According to the Korea Disease Control and Prevention Agency (KDCA), the number of severely ill patients treated in intensive care units (I.C.U.s) rose to 425 as of Monday midnight, a jump by 16 from the previous day and the fourth straight day of being over 400. This is the largest figure since Aug. 27, and the third largest figure since the beginning of the pandemic.

More than half of all I.C.U.s are filled, with the occupancy rate standing at 54.9 percent.

Severe cases and deaths among this elderly age group have been on the rise lately, beating out other age groups in terms of new infections.

In addition, mass infections at nursing hospitals and nursing homes have been increasing since August, health authorities said Tuesday. The elderly at these places were the first to receive vaccines back in February, considering their high susceptibility to the virus.

According to the government’s data, since August, a total of 101 virus outbreaks were found at nursing hospitals and related facilities, infecting 2,535 patients.

“In most cases, an employee or a patient caught the virus outside and brought it inside the facilities, causing the spread,” Lee Sang-won, head of the epidemiological investigations team at the Central Disaster and Safety Countermeasure Headquarters, said during a briefing on Tuesday.

Officials pointed to the delay in testing, the drop in individuals' immunity and the closed, crowded environment as factors contributing to the outbreaks.

“Preventive measures such as providing enough ventilation should be fully abided by at nursing facilities,” Lee said, urging the facility users to get their booster vaccines and get tested immediately if they show symptoms.

With the wave of severe cases, some red flags have been raised in light of the country’s “With Corona” strategies.

The government earlier warned it would initiate an emergency plan and halt the "With Corona" strategy if intensive care beds ever reach 75 percent capacity, which is considered to be the safe maximum limit to be able to manage the country's medical system. Like how a stock market circuit breaker refers to a temporary suspension in trading, the lifts on social distancing will be put on hold and the stricter restrictions will be reintroduced in addition to expanding areas that require a vaccine pass.

Out of 1,121 Covid-19 intensive care beds across the country, 618 were occupied as of 5 p.m. Monday. The emergency plan will be initiated if an additional 222 are filled.


The Ministry of Education, however, reaffirmed that it will hold the national college entrance exam, known as the CSAT, this upcoming Nov. 18 even if the country adopts the emergency plan.

“There is no change in the CSAT schedule,” the ministry said in an online briefing on Monday. "We cannot perfectly predict the situation, but we are preparing for everything."

School officials are raising their guard against the virus as cases continue to grow among students in classes, in line with the expansion of in-person attendance.

From Nov. 4 to 8, a total of 1,529 kindergarten to high school students were infected with Covid-19, the Education Ministry said. The daily average was 305.8, a rise by 8.4 from the same period the week before.

“We expect Covid-19 cases among students to rise for a while,” the ministry said.