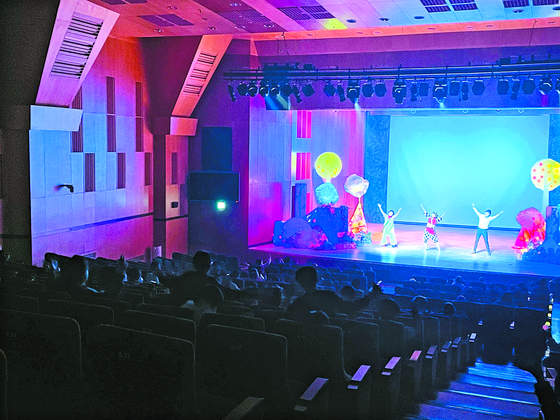 
After two years of waiting under the virus curbs, 131 fifth grade students at Myeonmok Elementary School gathered at Kwanglim Arts Center in southern Seoul to watch “Pepe’s Dream” on Nov. 3, as field trips resumed along with the introduction of the government's "With Corona" scheme.

"Pepe's Dream" was a small-scale play led by three actors, and the students actively engaged in the play, copying the dance moves or shouting out the characters’ names.

"The most impressive part was when Tom and Pepe became friends and went together to a house made of biscuits," fifth-grader Lee Geun-won said, adding, "It was fun doing the dance moves from my seat."

“Pepe’s Dream” was inspired by the French composer Maurice Ravel’s suite based on the fairy tales of Mother Goose, and includes music tracks “Pavane of the Sleeping Beauty,” “Tom Thumb,” “Conversation of Beauty and the Beast,” “Laideronnette, Empress of the Pagodas” and “Fairy Garden.”

The future is looking brighter for small theater companies now that they can again organize performances like “Pepe’s Dream” due to the “With Corona” strategies kicking in.

According to the Seoul Metropolitan Government, it allocated 600 million won ($509,000) of its supplementary budget in July to support cultural and artistic organizations. With this financial aid, a total of 21 teams will hold 94 performances until the end of this year — of which, students at 69 schools around Seoul can watch for free.

The decision comes as the cultural sector was hit hard by the pandemic.

Actors Park Hyeon-cheol (Ravel), Jung Da-woon (Pepe) and Bang Eun-ji (Tom) in “Pepe’s Dream” all agreed that until now, even when they were performing on stage, they felt like they were “doing rehearsals in the dark” as they could only film their performances without an audience.

“It’s been a long time since the actors and the audiences could truly enjoy it all together,” the actors said.

According to the Arts Council Korea, 75.9 percent of performing arts companies cited cancellations and postponements as the biggest damage caused by Covid-19. Another 16.1 percent responded that they are in search of a new distribution method, and 3.6 percent said they are preparing for online performances.

Recognizing such difficulties, the Seoul Metropolitan Government expanded the financial aid to 2.43 billion won in its budget for 2022, and expanded the number of schools that can watch for free by more than eightfold, to 606.

“Performances for adults are resuming rapidly following the 'With Corona' scheme, but there is still a note of caution for children’s plays,” an official from the production agency TB ent, which organized the play “Pepe’s Dream,” said. “Performances are being canceled, and we feel like we are still in the extension of the Covid times.”

Seoul City also believes that these changes will help improve the problem of teenagers’ lack of experience in the fine arts of music, dance and theater.

In a Seoul Foundation for Arts and Culture survey on the cultural experience of Seoul citizens in 2020, only 20.5 percent of teens said they have watched a play before. Those who had watched traditional performances were only 23.4 percent, music at 17.4 percent, and dance at 14.4 percent.

Han Jeong-yi, a fifth-grade teacher at Myeonmok Elementary School, said, “Plays are included in the curriculum of Korean language for third to sixth graders, but it isn’t easy to watch a play in groups, and that became even more difficult during the Covid-19 pandemic.”

“I'm sure it must have been a valuable experience for the kids,” she added.