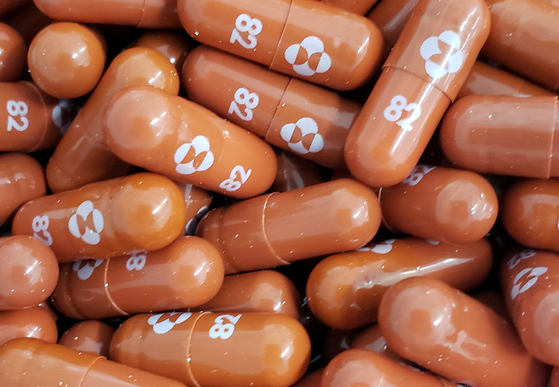 LEE KYONG-HEE
The author is the head of the Innovation Labof the JoongAng Ilbo.


Global pharmaceutical company Pfizer recently released groundbreaking clinical results for an oral Covid-19 treatment called Paxrovid. Taking the drug within three days of showing symptoms can reduce the risk of hospitalization and death by 89 percent, the company said. Only six out of 607 Covid-19 patients who took Pfizer’s new drug were hospitalized, and none died. In the control group, 41 were hospitalized of 612 positive cases, and 10 of them died.

American pharmaceutical company Merck & Co. announced its results a month before Pfizer. Its Molnupiravir reduced the risk of severity by 50 percent, with no deaths. Pfizer plans to apply for emergency FDA approval while Merck already got conditional approval in Britain.

Oral drugs are being called a “game changer.” Unlike intravenous injections that require hospitalization, oral drugs can be prescribed regardless of the medical environment. It was the antiviral drug Tamiflu, patented by Swiss pharmaceutical company Roche that quelled the H1N1 scare in 2009. In Korea, Tamiflu is covered by health insurance, and ten pills for a five-day regime can be prescribed for a few dollars.

Merck’s new drug costs $712 for a five-day prescription. The company signed an agreement to use production patents of Molnupiravir with the Medicines Patent Pool (MPP) under Unitaid, the global health agency under the United Nations. It marks the first voluntarily release on the rights to produce generic drugs without paying patent fees for use by 105 mid and low-income countries.

However, Doctors Without Borders expressed regret that mid-to high-level countries like China and Brazil were not included when they have many patients and capabilities to produce generic drugs. They pointed out that it was a problem to impose restrictions on the right to use after receiving a huge amount of research funding from the U.S. government. Under the slogan, “Medicine is not a luxury,” Doctors Without Borders advocates removing legal restrictions and intellectual property rights on technologies related to Covid-19.

The Korean government has pre-purchased enough Merck and Pfizer drugs for more than 400,000 patients to be supplied from the first quarter of 2022, and additional purchases are under review. Korea has joined the rank of the developed country and cannot enjoy a royalty-free benefit.