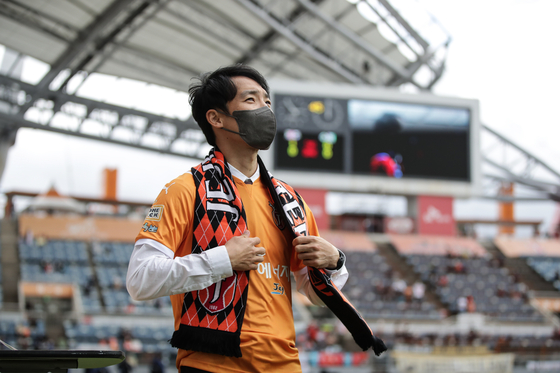 Cho Yong-hyung looks at the scoreboard during his retirement ceremony at Jeju World Cup Stadium in Jeju on Saturday. [K LEAGUE]


Jeju United held a retirement ceremony at Jeju World Cup Stadium on Saturday for Cho Yong-hyung, who played a total of 176 matches with the club throughout his career.

Cho made his professional debut with Bucheon SK, the predecessor of Jeju United, in 2005 and played most of his K League career with the club, with the exception of 2007, when he played with Seongnam Football Club.

He also appeared as a defender for the national team, making his debut in 2008 in a friendly against Chile.

During the 2010 South Africa World Cup, Cho was part of an impressive defensive national team, alongside big names like Park Ji-sung, Lee Young-pyo and Cha du-ri. Korea advanced to the round of 16, but their run was cut short after dropping a match against Uruguay 2-1. Cho was capped a total of 42 times. 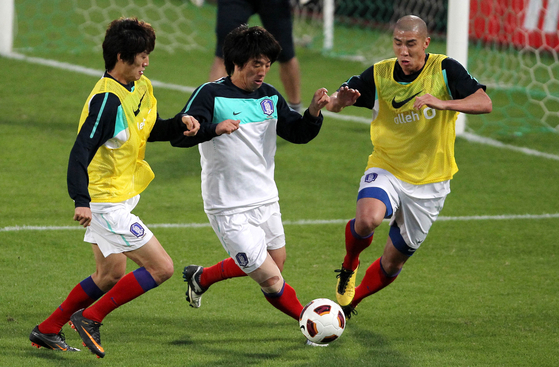 
In 2010, he went abroad to play in the Qatar and Chinese leagues. Then he returned to the Jeju club in 2017 and has been with his team ever since. Despite playing 33 matches in 2017 and 2018, Cho started only five matches in 2019 with Jeju, while also acting as playing coach for the team. He didn't start any games during the 2020 season.

"In fact, I wanted a bit more time on the field,” Cho said a day before his retirement ceremony. “Until last year, I was in such good condition that I was confident that I could be on the starting line on any match. But I didn’t get that many chances because of Covid-19.

“I decided that now is the right time to leave. I am happy to end my footballing career with Jeju United and our fans.” 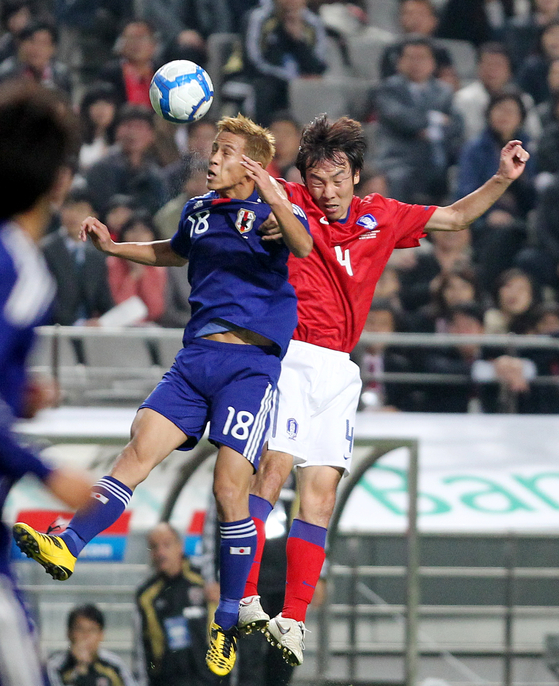 Cho Yong-hyung, right, fights for the ball during a match between Korea and Japan held at Seoul World Cup Stadium in western Seoul on Oct. 12, 2010. [JOONGANG ILBO]


Despite his storied career, Cho has never won the K League title. He finished runner-up three times — in 2007 with Seongnam, and in 2010 and 2017 with Jeju. Cho now hopes to achieve that dream from the sidelines as he works on pivoting to a coaching career.

“I don’t have much experience with coaching,” said Cho. “I will start from the very beginning. Even though I played defense, I want to coach a club to switch quickly from defense to offense in midfield.

"But more than anything else, I want to be a coach who can observe players closely and can communicate well with the team. I hope to achieve that dream of winning the title as coach. Maybe even someday at Jeju United.”