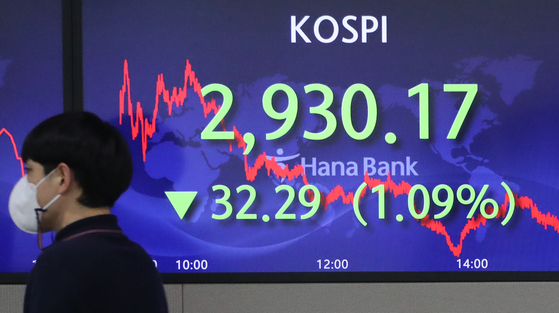 A screen at Hana Bank's trading room in central Seoul shows the Kospi closing at 2,930.17 points on Wednesday, down 32.29 points, or 1.09 percent, from the previous trading day. [YONHAP]


Korean stocks slumped more than 1 percent Wednesday amid concerns about rising inflation. The Korean won fell against the dollar.

Trading volume was moderate at about 559 million shares worth some 9.5 trillion won ($8 billion), with losers outnumbering gainers 807 to 86.

Stocks had a lackluster start as investors are worried the rising inflation pressure may advance the Federal Reserve's tapering timeline.

Krafton, however, rose 4.08 percent and closed at 484,500 after it was announced on Tuesday that its online mobile shooting game PUBG Mobile was chosen as one of the eight Esports games for the 2022 Hangzhou Asian Games by the Olympic Council of Asia.

The local currency closed at 1,180.9 won against the U.S. dollar, up 3.7 won from the previous session's close.