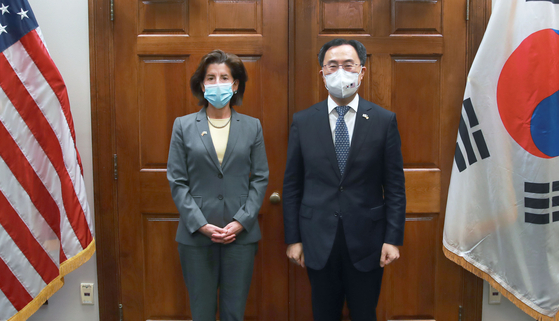 
Korea's trade minister told his U.S. counterpart that her department’s request that chipmakers provide detailed information on semiconductor sales and inventories should be a one-off.

Trade Minister Moon Sung-wook conveyed the message in a meeting with U.S. Commerce Secretary Gina Raimondo during a visit to the U.S. on Tuesday, a day after a deadline for the filing of the information by major chip suppliers including Samsung Electronics, SK hynix, Intel and TSMC.

“Minister Moon reiterated that the request for the information should be done as an exception only this once,” said the Ministry of Trade, Industry and Energy in a statement.

The ministry quoted Raimondo as acknowledging Korea's concerns, adding that the action “was inevitable under unprecedented circumstances.”

Samsung Electronics and SK hynix submitted filings before the deadline, although they omitted key data that risked compromising non-disclosure agreements with customers or revealing trade secrets.

SK hynix said in its response to the inquiry that its main product range – memory chips such as dynamic random access memory (DRAM) and NAND Flash – is not in short supply.

“While this specific question asks for products with “the largest order backlog,” it is important to state that in the last three years, there was no backlog for any of SK hynix’s products,” the company stated in a filing partially made public.

Samsung Electronics’ submission had not been made public as of press time.

In an effort to address supply chain bottlenecks in the semiconductor industry, Moon and Raimondo agreed to hold meetings of their underlings on a regular basis with the first set for Dec. 8.

Those meetings may deal with supply chain problems in other crucial areas including biopharmaceuticals and automobiles.

Moon also raised the need to amend the U.S. Trade Expansion Act Section 232, a regulation used by the administration of Donald Trump to impose higher tariffs on steel and aluminum.

The trade minister mentioned a recent agreement between the U.S. and EU on the lifting of Section 232. Raimondo suggested that the two countries continue dialogue on the issue, according to the Trade Ministry.