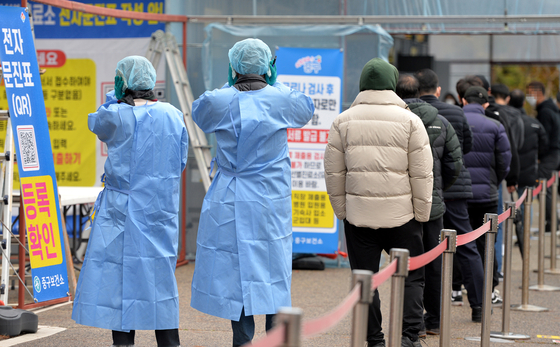 Medical staff at a Covid-19 testing site in a public health center in Daejeon use portable heat packs to warm themselves on Wednesday. [KIM SEONG-TAE]


Korea reported its highest number of severe Covid-19 cases ever, calling into question the country’s “With Corona” strategies.

According to the Korea Disease Control and Prevention Agency (KDCA), the number Covid-19 patients in critical condition rose by 35 from the previous day to reach 460 as of Tuesday midnight.

This is the largest figure since the government started keeping track in April 2020. The previous record was set on Aug. 25, when the country had 434 severe cases.

Patients in critical condition refer to those who require oxygen treatment (such as high flow oxygen), mechanical ventilation or being put on a respirator, extracorporeal membrane oxygenation (ECMO), or continuous renal replacement therapy (CRRT).

“The Covid-19 indicators, including the number of critically ill patients, fatalities and the basic reproductive ratio, are worsening at a faster pace than expected,” Prime Minister Kim Boo-kyum admitted during a virus response meeting on Wednesday.

Korea registered 2,425 new Covid-19 infections on Wednesday, a jump of 710 from the day before.

Most of the locally transmitted cases were from the greater Seoul area comprised of Seoul, Gyeonggi and Incheon, accounting for 82.6 percent, while 17.4 percent were from other parts of the country.

Fourteen more people died from the virus, bringing the death toll to 3,012.

The country has seen a dangerous rise in the number of severe cases after it shifted to a set of policies under the name “With Corona” in November. Under the new scheme, the country said it would focus more on managing seriously ill patients rather than trying to stop infections.

The idea was that with a high rate of vaccinations, Covid-19 would become like other infectious respiratory diseases such as seasonal influenza, producing much fewer hospitalizations and deaths than earlier in the pandemic.

Health authorities believe that the current number of critical cases and deaths is similar to the level of that during the third wave of pandemic, which swept the country from late last December until early this year.

“The daily average of infections during the third wave was around 1,000,” Park Young-joon, head of the epidemiological investigation team at the Central Disease Control Headquarters, said in a briefing on Tuesday.

“Although that number doubled recently, the figures of severe cases and fatalities haven’t doubled but show a similar level to the third wave.”

In Korea, severe cases remained in the 300s from September until Nov. 5, but jumped past 400 and show no signs of declining.

The daily average of severe cases from Oct. 31 to Nov. 6 rose by 32, or 9.6 percent, compared to the previous week, according to the Central Disaster and Safety Countermeasure Headquarters.

The authorities are particularly worried about infections among the elderly aged 60 and above. Severe cases and deaths in this group have been on the rise, beating out other age groups.

“Most people aged 60 and above were vaccinated in the first half of this year,” Lee Sang-won, head of the epidemiological investigations team at the Central Disaster and Safety Countermeasure Headquarters, said. “With the effectiveness of the vaccine decreasing over time, the possibility of infection gets higher.”

Mass infections at nursing hospitals and nursing homes have been increasing since August, with a total of 101 virus outbreaks being found at the facilities, infecting 2,535 patients.

With the number of critically ill patients hitting an all-time high, the intensive care unit occupancy rate is approaching a dangerous point.

Officials earlier warned they would initiate an emergency plan and halt the "With Corona" strategy if intensive care beds ever reach 75 percent capacity. If that happened, they said a "circuit breaker" might be necessary for the "With Corona" liberalizations, as a stock market circuit breaker suspends overheated trading. Relaxations of social distancing measures would be put on hold and restrictions reintroduced, in addition to expanding areas that require a vaccine pass.

However, the greater Seoul area, where more than 80 percent of infections come from, had 484 out of 687 intensive care beds full, or 70.5 percent.

The government originally planned to reveal new criteria to evaluate the virus situation, including a specific guideline of when to initiate a circuit breaker, on Tuesday. It postponed the announcement to next Tuesday.

Seeing increasing breakthrough infections among the elderly, health authorities said Wednesday that they will give booster shots to employees and patients at medical institutions five months after their final shot, reduced from the previous six months.

Capacity limits put on welfare facilities and community centers for the elderly will be lifted, but only those who test negative or have been fully vaccinated will be allowed to enter.

In addition, the KDCA is procuring an additional 33 ECMOs and 60 respirators with a budget of around 6.7 billion won, for hospitals that need equipment.

Amid Korea's worsening pandemic, health workers at hospitals across the country announced a rally to be held on Thursday to demand more staffing and support measures from the government.

In a statement released Wednesday, the Korean Healthcare Workers’ Trade Union (KHWU) under the major umbrella labor group the Korean Confederation of Trade Unions (KCTU) said it will hold a rally in front of the Blue House as their demands haven’t been met by the government.

The union has been requesting detailed guidelines on medical personnel deployment treating contagious diseases, an increase in hospital beds and staffing, and an expansion of public health care resources.

“Tomorrow’s KHWU rally is expected to be a rally calling for better policies mostly by union officials rather than strikes by individual medical facilities,” Lee Chang-joon, a senior official from the Ministry of Health and Welfare official said Wednesday. “We believe there will be no big disruption in medical services by the strike.”