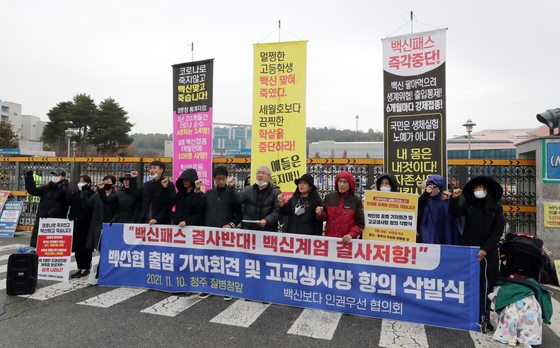 A civic group called Human Rights Before Vaccines holds a press conference against Covid-19 vaccines and vaccine passes in front of the Korea Disease Control and Prevention Agency office in Cheongju, North Chungcheong, on Tuesday. [YONHAP]


"I am the mother of the 19-year-old boy who died after getting vaccinated" is the title of a petition posted on the Blue House website last week.

“It has only been a week since my son’s death and I still cannot believe he is gone […] but I am writing today hoping to help others,” read the post by the mother.

According to the 19-year-old’s mother, her late son was a healthy boy with no underlying medical conditions.

One day, just over two months after receiving his second Covid shot, the boy complained of an upset stomach and bleeding gums during school.

His teacher sent him to an emergency room at a nearby hospital, and on his way, he had a sudden seizure.

“In the end, they told me that my son had six bleeds on his brain that the doctors could not locate, so surgery was not possible,” wrote the mother.

“I am not writing to receive financial compensation for my son’s death. I am writing because I do not want other young boys and girls becoming sick like my son,” read the post.

“Vaccinations are not mandatory — it’s a choice. But for 19-year-old high school seniors, it is mandatory because they can't take the CSAT [national college entrance exam] otherwise. Is the government truly giving these individuals a choice in getting vaccinated?”

The causality of the boy’s death and his shot has not yet been determined by the health authorities.

During the press conference, Son Hyeon-jun, professor at North Chungcheong University’s medical school and head of the civic group, said that the recent case of the 19-year-old boy who died is a “crime committed by the state by forcing individuals to get vaccinated.”

"Through offering vaccine incentives and implementing vaccine passes since the launch of the 'With Corona' policy in November, they are indirectly forcing people into getting vaccinated,” said Son.

“Deciding whether to get the vaccine should be a personal choice that is not forced, and one should not face disadvantages for choosing against it.”

The vaccine pass is a Covid health pass system, similar to those used overseas, for entry into facilities prone to virus transmission, including noraebang (singing rooms), public bathhouses and indoor sports facilities.

A meeting at the National Assembly titled “Discussion with Vaccine Victims in the New 'With Corona' Era” also took place Tuesday morning.

Hosted by Rep. Shim Sang-jung of the Justice Party, KDCA staff and victims and families of those who died or suffered critical medical complications after jabs attended the meeting to discuss the KDCA’s loopholes in handling deaths and critical cases that arise after receiving the vaccine.

At the meeting, victims and families demanded that the government acknowledge the causality between the vaccine and the adverse reaction more broadly, and also reveal more information on how the causality is decided.

“We deserve more than a simple number which is supposed to mean that there was not enough evidence to determine causality. It is certainly not enough for me to understand the critical state that my previously healthy sister is in right now,” said Ji Su-hyeon, sister to a 48-year-old woman who has been in an intensive care unit since her second Pfizer shot in July.


Jo Eun-hee, health hazard response officer of the KDCA, expressed her regret over the string of cases claiming to be related to the Covid-19 vaccines presented during the discussion.

“The KDCA has rushed to create systems and platforms to deal with Covid-19, and during the process we have fallen short on many fronts, especially for the victims,” said Jo.

“The standards that we have in place today to determine causality between the vaccine and death is adopted from the U.S.”

Jo said that the KDCA will work to create a more fair, transparent evaluation system by gathering more national data.

There are about 5 million people over the age of 18 who have so far chosen not get vaccinated, according to the KDCA.

According to a survey conducted by Hankook Research with 1,000 adult participants in October, 70 percent of the people who have not yet been vaccinated answered that they chose not to get vaccinated because they were afraid of any side effects.

“I am not comfortable getting injected with something that has not been thoroughly verified, and I am more afraid about what the vaccines will do to my health than the virus itself.”

A total of 678 deaths and 908 critical cases were reported by civilians following vaccination, according to data from the KDCA in September.

Of those cases, only 0.4 percent, or two deaths and five critical cases, were acknowledged by the government as being caused by the Covid-19 vaccine.