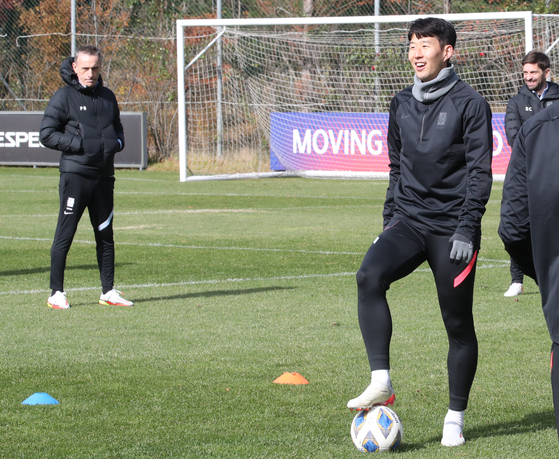 
The road to the 2022 Qatar World Cup continues Thursday as Korea take on the United Arab Emirates in the third round of Asian qualifiers at Goyang Stadium in Goyang, Gyeonggi.

Thursday's game completes the first leg of the third round, with the second leg then set to start immediately on Nov. 16. Korea currently sits in second place in Group A with eight points, two points behind Iran and three ahead of Lebanon. As the top two teams advance to the World Cup, Korea is currently exactly where it needs to be.

Korea's third round results have so far been fairly mixed. The campaign started with a disappointing 0-0 draw with Iraq, with the Taeguk Warriors then picking up the pace for a 1-0 win over Lebanon and 2-1 win over Saudi Arabia.

A 1-1 draw with a strong Iranian team rounds off the games so far, leaving Korea with two wins, two draws and no losses.

Head coach Paulo Bento will be looking to build on that solid start over the next six games. While finishing within the top two is the only thing that really matters, Korea also need to look for better results against Iraq, Lebanon and Saudi Arabia — all significantly lower-ranked teams — if they want to arrive in Qatar next year as a force to be reckoned with.

The move comes as Hwang Ui-jo is out with an injury taken while on duty with Bordeaux in the French Ligue 1. With the Korean squad, Bento often opts for a single striker out in front of an attacking midfield line, a role that Hwang Hee-chan will take if Bento opts to follow that formation this time around.

The move shouldn't take Hwang out of his comfort zone. Although for the national team he tends to play on the wing, with Wolves, Hwang has moved across the front of the formation.

“It’s a pity that Hwang Ui-jo, who scored many points for the national team, can’t play the qualifiers this time,” Hwang Hee-chan said before national team training. "However, there are other good players on our team and we will prepare well together. I will do my best to show my best performance.”

Hwang will have plenty of support, with Tottenham Hotspur forward and national team captain Son Heung-min just behind him, alongside other European stars Lee Jae-sung, Jung Woo-young and Hwang In-beom.

Son has scored the last two goals for the national team, against Iran and Saudi Arabia, with Hwang In-beom also scoring against the latter team. Bluewings striker and national team stalwart Kwon Chang-hoon is the only other player to score during this round, against Lebanon.

Kim Min-jae of Fenerbahce will return to familiar territory as the anchor of the Korean defense, but he'll be leading a back line without Kim Young-gwon of Gamba Osaka, who is recovering from a calf injury.

Korea will take on the United Arab Emirates in the final game of the first leg of the third round of Asian qualifiers for the 2022 Qatar World Cup at Goyang Stadium at 8 p.m. on Thursday. The second leg will begin with a match against Iraq at Thani Bin Jassim Stadium in Doha, Qatar at 6 p.m. on Nov. 16, or at midnight later that night in Korea.