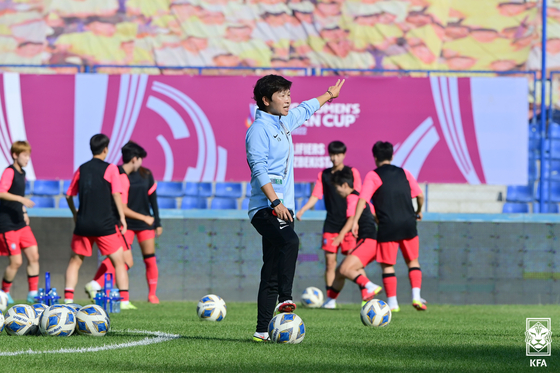 Hwang In-sun, center, works with the Taeguk Ladies in Pakhtakor Central Stadium in Tashkent, Uzbekistan ahead of a 2022 Women's Asian Cup qualifier between Korea and Mongolia on Sep. 17. At the time, Hwang was working as an assistant coach with the senior team. [KFA]


The Korea Football Association (KFA) appointed Hwang In-sun as head coach of the women's U-20 national team on Tuesday, making her the first female coach to take the helm of a national team.

Hwang is part of Korea's very first class of professional female footballers, alongside Kim Jin-hee, Song Ju-hee, and Yoo Young-sil. She debuted on the national team in 1994, playing her first match against China at the Hiroshima Asian Games.

Hwang, who played as a midfielder, appeared with the national team for over a decade and scored three goals while being capped 39 times. In 2003, she scored the winning goal against Japan at an AFC Women's Championship match in Bangkok, earning Korea's first-ever ticket to the FIFA Women's World Cup.

In the domestic WK League, Hwang played for the Incheon Hyundai Steel Red Angels from 1996 to 2004 and transferred to Seoul City WFC as a founding player, becoming the first captain of the club. She played with Seoul City until 2006, when she retired.

Hwang is one of the few female football coaches to have earned a professional coaching diploma, the highest level of coaching accreditation issued by the Asian Football Confederation (AFC). It is also a prerequisite to coach a national team.

Hwang started her coaching career with Seoul City in 2007 and then went on to become the first female assistant coach in the KFA in 2010, when she and head coach Hwang In-cheol led the U-20 national team to a historic third-place finish at the 2010 FIFA U-20 Women's World Cup.

After stints in and out of KFA, she became assistant coach of the Taeguk Ladies in 2019 under Hwang In-cheol, who was in charge of the national team at the time. After Hwang In-cheol was ousted following allegations of athlete abuse, Hwang In-sun took over as acting head coach until Colin Bell was named head coach.

"Honestly, I had no idea, but I am so grateful to have this chance," said Hwang In-sun on Tuesday. "I feel more responsibility now that I am the first female head coach of a Korean national team. I will work with our players to promote women's football.