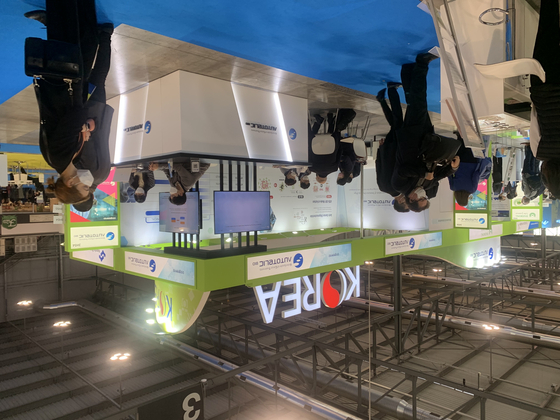 Visitors to the Korea Pavilion at the Convention on Pharmaceutical Ingredients (CPhI) Worldwide 2021 take a look at Korean pharmaceutical company booths in Milan, Italy, Tuesday. Around 20 companies from Korea set up their booths at the pavilion or independently to market their products and seek new business opportunities. [SARAH CHEA]


MILAN, Italy — Crowds were wanting at the Korea pavilion at the Convention on Pharmaceutical Ingredients (CPhI) Worldwide 2021.

Enthusiasm was anything but.

"Korea is the only Asian country that has a country pavilion in this year's CPhI Worldwide," said Choi Yong-hee, export promotion team leader at the Korea Pharmaceutical Traders Association (KPTA) at the CPhI Worldwide 2021 held in Milan, Italy, on Tuesday.

CPhI is the world's first international pharmaceutical fair to be held offline since the Covid-19 pandemic started. It opened its doors to the public on Tuesday with a bigger than-expected-crowd despite the absence of attendees from China and India, two pharmaceutical powerhouses.

At this year's convention, held from Tuesday to Thursday, around 20 Korean companies had booths either in the Korea pavilion, or independently, for business meetings and marketing efforts. Before the pandemic, around 40 companies participated in the global fair annually. The Korea pavilion is organized by the KPTA and sponsored by the Korea Trade-Investment Promotion Agency (Kotra).

"The world's pharmaceutical market is very big, valued at about $1.2 trillion as of now. It, also, is one of the fast-growing markets," said Choi. "While the United States, Japan and Europe are the major players in the market, pharmaceuticals is an 'emerging' industry in Korea."

"Korea is well on the way to becoming a global leader in the pharmaceutical industry," Choi said. "The volume of pharmaceutical exports from Korea has been growing by double-digit percentages annually, at least over 10 percent."

Korea's pharmaceutical product export volume reached 9.97 trillion won ($8.4 billion) in 2020, up 62.5 percent, according to data published by the Ministry of Food and Drug Safety. Germany was the largest importer of Korean pharmaceutical products, in which the volume surpassed $1.9 billion last year, while the United States second largest, at $781 million.

The Korea Pavilion was less jammed compared to those of European companies, which were often packed with potential buyers and visitors. But two types of business attracted the attention of overseas buyers: those making Covid-19 drugs and contract and development manufacturing organization (CDMO), which manufacture drugs for other companies.

Yungjin Pharm has displayed various finished products, including a product to treat pulmonary fibrosis. The product has been widely used as a secondary treatment for Covid-19, according to Kim Yun-hee, manager at Yungjin Pharm's global business division. Yungjin Pharm is 52.5 percent owned by KT&G, the country’s largest tobacco maker. 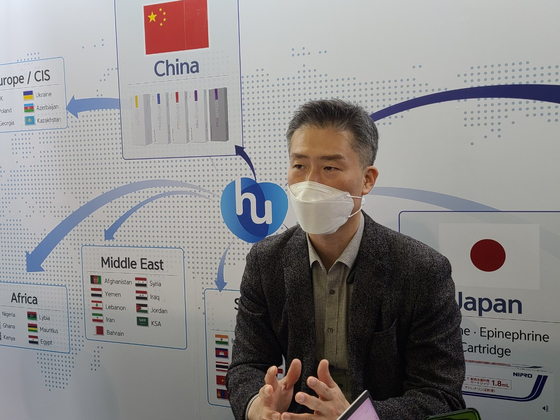 Ko Han-seok, head of overseas business division at Huons Global, talks about its major products in its booth at the Korea Pavilion at CPhI Worldwide 2021, Tuesday. [SARAH CHEA]


Huons Global said its two products were of great interest to many foreign buyers — pine injection and dexamethasone — both critical in treating symptoms of Covid-19.

"The pine injection contains heparin sodium, which is a material that is essential in treating Covid-19. Currently Taiwan is the largest exporter of the product, while it is also very popular in Central and South American countries, west Asian countries and the Middle East," said Ko Han-seok, head of overseas business division at Huons Global. "Dexamethasone is a supplement to Covid-19 treatments that is useful for patients with severe symptoms who experience respiratory failure."

"The dexamethasone market was a niche market before, but the demand has been growing due to the Covid-19 pandemic," Ko added.

Hanmi Pharm brought its CDMO service to the fore for this year's CPhI Worldwide.

"Hanmi owns the capability to produce materials that are necessary to make mRNA vaccines, like lipid or capping," Steven Cho, general manager at Hanmi Pharm’s global business team, told the Korea JoongAng Daily. "Chemical CDMO is one of the factors on which Hanmi has currently been concentrated."

Many of the 10 companies at the pavilion said CPhI Worldwide is one of the great opportunities to promote themselves to potential global companies and win big-sized contracts.

In 2018, Hanmi signed a contract with Sanofi Russia for a combined drug. The company said no discussions were made before the fair, but the contract was fully agreed to during the event as a person with signing authority suddenly walked into Hanmi's booth.

"CPhI Worldwide is a good opportunity for us to attract new companies as partners every year, as well as continue close relationships with existing partners," Cho said. "Last year when the fair was held online, it was almost impossible for companies to make new connections with new companies."