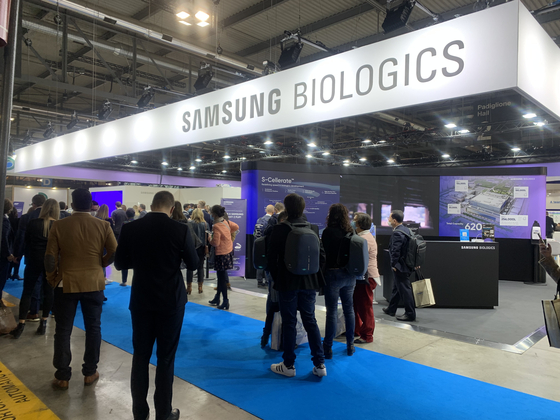 Visitors are crowded in front of Samsung Biologics’ booth at the Convention on Pharmaceutical Ingredients (CPhI) Worldwide 2021, held in Milan, Italy, on Tuesday. [SARAH CHEA]

It was just one of a few ambitious plans the Korean biopharmaceutical company mentioned during the Convention on Pharmaceutical Ingredients (CPhI) Worldwide 2021, which was held Nov. 9 to 11 in Milan, Italy.

"Now it has become an undisputed fact that Samsung Biologics is one of the top three companies in the world's contract and development manufacturing organization [CDMO] industry," said James Choi, head of the Samsung Biologics global information and marketing center. "Samsung basically has almost all large global pharmaceutical companies as our customers. We now have no rivals."

The Samsung Biologics booth was especially busy at the CPhI Worldwide 2021, with many foreign buyers sitting at the tables for business meetings, while some were busy taking a virtual tour of the biopharmaceutical company's third manufacturing plant in Songdo, Incheon.

With a 260-square-meters (2,800-square-foot) booth, the largest single booth at the fair, Samsung Biologics pitched itself as company that stays ahead of the global CDMO market, and revealed its goal to become a company that handles world's half of CDMO orders in the future.

Two virtual reality headsets were prepared for people to take a look at the company's third plant, the largest of its kind in the world. A lottery ball machine was placed in the booth to choose six winners per day for one Galaxy Z Flip, two Galaxy Watch 4s and three Galaxy Bud Pros.

Samsung Biologics was one of around 20 entities from Korea participating in CPhI Worldwide 2021. CPhI Worldwide is the largest conference for the global biopharmaceutical sector and related industries. It has drawn more than 2,500 international exhibitors from 170 countries and 48,000 experts from around the globe as of 2019, but it was held only online in 2020 due to the pandemic. 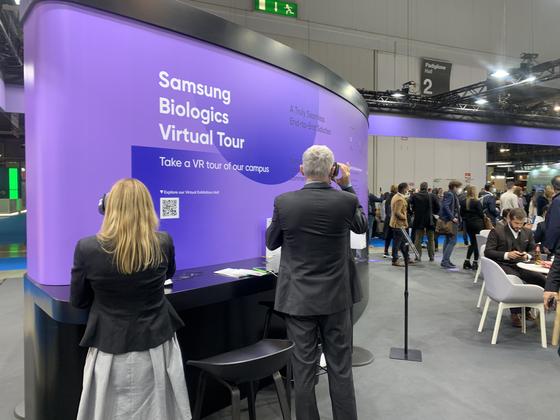 
Samsung Biologics has been working to establish itself as a highly competitive CDMO, with the aim of becoming world's largest bio company in terms of capacity. It currently has three plants in Songdo, with 30,000 liters (7,930 gallons), 154,000 liters and 180,000 liters of annual capacity.

The batch success rate is around 98 percent, and about 80 big global pharmaceutical companies are engaging the company in a total of 100 projects, the company said.

Quality, speed and pricing are the three big factors that companies want from CDMOs, said Yang Eun-young, sales team leader at the global sales operation center of Samsung Biologics, and Samsung itself is qualified for all the three.

"For big global companies, how quickly CDMO companies can manufacture products is one of the most important factors," Yang said. "Since Samsung Biologics started the CDMO business, we have never missed a deadline, but rather was always quicker than the arranged time."

The company is currently constructing a fourth plant, which will have an annual capacity of 256,000 liters. The fourth plant is likely to bring the company's annual production capacity to 620,000 liters, which the company says is equivalent to nearly 30 percent of the global contract manufacturing market for biopharmaceuticals. The construction is expected to complete by July 2023.

"Samsung Biologics aims to become a company that has over 50 percent of market share in the global CDMO market," Yang added.

A total of six big pharmaceutical companies have extended CMO contracts with Samsung Biologics this year. The deals were worth a total of 709.9 billion won, according to the company. The big companies include Switzerland's Roche, Cambridge, Britain's AstraZeneca and Edison, New Jersey's TG Therapeutics.

Samsung Biologics in late August announced that it has plans to build fifth and sixth plants, but no details about it was revealed during CPhI Worldwide 2021. 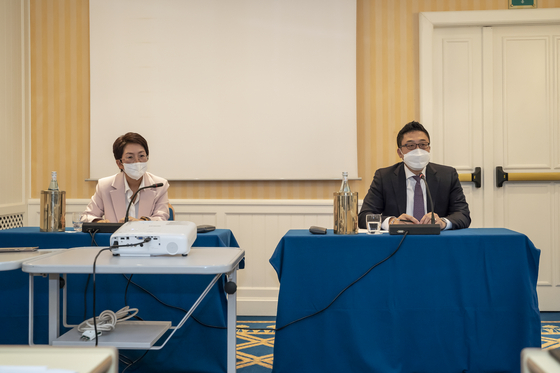 
Despite it already being a leader player in the market, Samsung Biologics said it still has room for improvement.

mRNA is the latest area of focus. It is currently building facilities to produce mRNA vaccines, with the plan of completion by April 2022.

"mRNA was relatively small sector before, but demand sharply increased due to the pandemic," said James Park, the company's global sales operation center leader. "Our goal is to win at least one mRNA contract by April next year, when the facilities are expected to be fully operational."

This would help the company to expand its business portfolio, which is currently just a little more than fill-and-finish contracts. Samsung Biologics is a CMO for Cambridge, Massachusetts-based Moderna, packaging and bottling the Covid-19 vaccines.

When asked about the company's plan for entering new drug development business, Choi emphasized that the company's business model is CDMO at this time.

"We will endeavor to maintain our No. 1 position in CDMO industry, and attract more global biopharmaceutical companies as our customers."