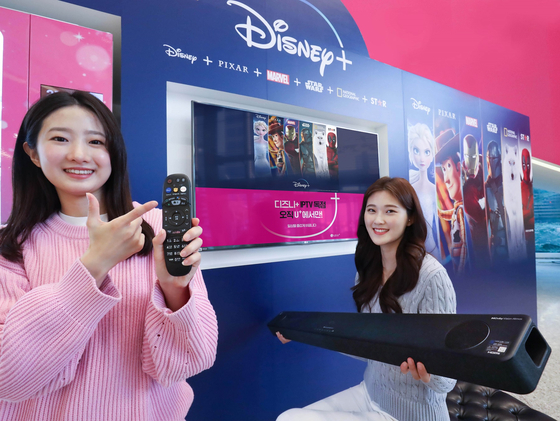 LG U+ introduced new mobile and IPTV subscription plans that will allow users to gain access to Disney+ for free, a day ahead of the online streaming service officially that starts in Korea on Friday. [LG U+]

A dizzying array of options is available.

Disney+ is offered at 9,900 won ($8.35) a month or 99,000 won for a year to everyone in Korea without any sort of package deal with a telecommunications company.

Customers that have KT and LG U+ can get special deals with their mobile plans.

People who sign up to LG U+ for the first time will get a three-month coupon for Disney+. 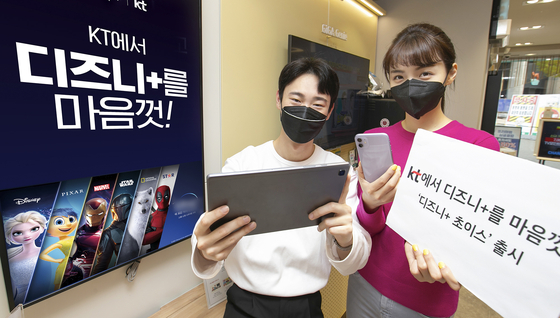 KT rolled out new mobile subscription plans that will allow users to gain access to Disney+ for free, a day ahead of the online streaming service that officially starts in Korea on Friday. [KT]

KT is still negotiating for an IPTV deal.

A monthly IPTV service plan priced at 24,600 won will let viewers log on to Disney+ on their televisions. Set top boxes will automatically be updated for existing customers.

Users of LG HelloVision’s cable TV service can sign up for the two new subscription plans at either 21,300 won or 22,400 won.

Existing LG U+ customers who renew IPTV plans of over 17,600 won or buy new phones will also get three months of free Disney+.

According to LG U+, the agreement with Walt Disney Korea is a part of their new “Why Not?” marketing strategy that they plan to expand in the future.

“When it comes to what customer need, we say, ‘Why Not?’ and we’ll make it happen,” said Chung Sue-hyun, executive vice president of consumer company at LG U+. “We plan on releasing new offers for our customers under the new strategy to give them an experience like no other.”

On Friday, Walt Disney will host the Disney+ Day as a global celebration of Disney+'s second anniversary as well as its rollout in eight markets, including Korea.

It will make available programs such as films and animations from the different properties owned by Walt Disney, such as Pixar, Marvel, Star Wars, National Geographic and Star.