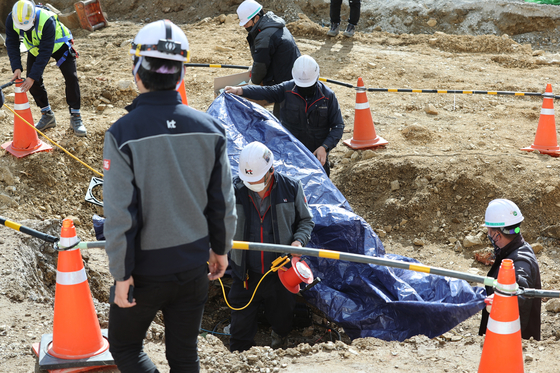 KT staffs work on restoring optical cables that were mistakenly cut at a construction site in Yeongdeungpo District, western Seoul, on Thursday. [YONHAP]


KT’s network service stopped working in some parts of Seoul on Thursday, putting the telecom company in the hot seat again following a recent network disruption.

The network disruption ran from 10:23 a.m. through 1:50 p.m., affecting both wireless and fixed-line communications for individual and enterprise clients in Guro and Yeongdeungpo Districts, western Seoul.

The temporary failure was caused by a mistaken cutting of KT’s fiber optic cables at a construction site where the Seoul city government is planting trees and landscaping.

A spokesperson at KT explained that the disconnection did not appear to affect many users given that nearby base stations swiftly backed up the station with the severed cables.

“The nearby stations managed to expand their coverage to fill in the affected station,” the spokesperson said, adding that the telecom operator received around 20 complaints regarding the disruption.

Asked whether the company will move to compensate the affected customers, the spokesperson said that it is unlikely given that relatively few people were taken offline.

The last month left millions of individuals, stores and companies around the nation disconnected due to a technical glitch. KT blamed a contractor.

KT said it would pay 40 billion won ($34 million) to compensate customers affected, an average of 1,000 won to all its mobile and broadband users.