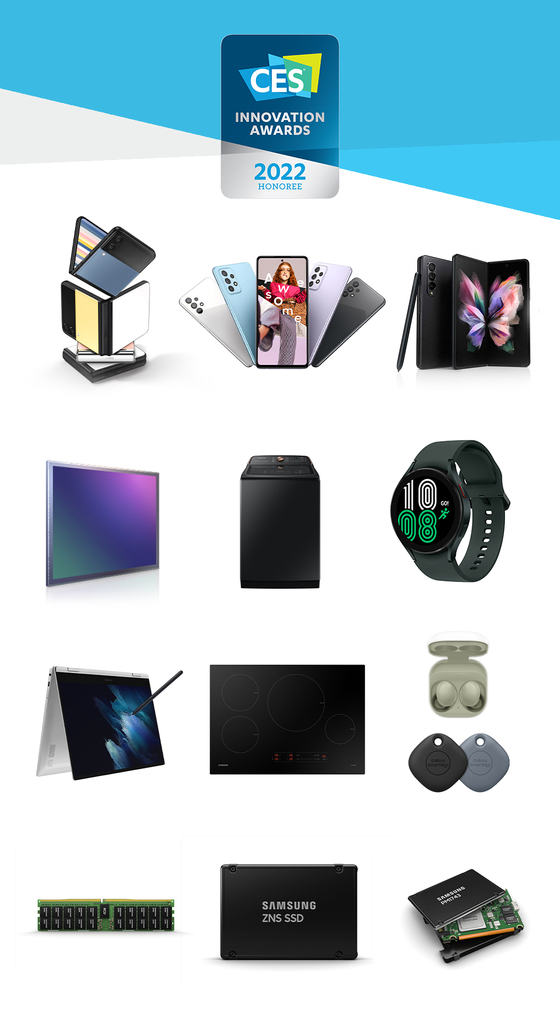 
Samsung Electronics and LG Electronics grabbed dozens of Innovation Awards ahead of CES 2022 next January as new smartphones and televisions dominate the list.

Samsung Electronics received a total of 43 Innovation Awards this year, including four “Best of Innovation” titles.

The Galaxy Z Flip3 Bespoke Edition won the Best of Innovation Award, alongside Samsung’s televisions and gaming monitor, according to the company.

The full list of honorees will be made available on Jan. 3 ahead of the official CES opening set for Jan. 5 through Jan. 8. The 2022 year’s edition of the trade show will be a hybrid in-person and digital event as it will host both physical and digital booths to showcase the newest technologies.

For the general Innovation Awards, Samsung Electronics won in a wide variety of categories, including displays, wearables, chips and smart home.

In terms of product category, television grabbed the most awards, at 21, followed by mobile devices with 11.

In the home appliance sector, the latest models from Family Hub, a connected refrigerator brand, and Bespoke, a customizable lineup, also won awards.

A set of chips that top the industry standard gained recognition. Among them is Isocell HP1, as the advanced image sensor for smartphones is capable of delivering 200 megapixel images, the first mobile sensor with that level of resolution.

The Consumer Technology Association (CTA), the owner and organizer of the annual trade show, announces the honorees every year as the competition selects consumer technology products across 28 categories based on design and engineering.

The “Best of Innovation” recognition is only given to those rated the highest in each product category.

The tech giant’s visual display chief Han Jong-hee is set to deliver keynote address for the show on Jan. 4 with a major theme centering around Samsung’s efforts to mitigate climate change in spearheading technological breakthroughs.

The CTA also granted an award to LG’s newest product category, the LG tiiun, which is an indoor plant-growing appliance.

The plant cultivator, released just last month, is 81.5 centimeters (32 inches) tall and has two shelves that can each hold up to three of the company’s gardening kits, which include seeds and artificial soil. The electronics maker sells 20 types of seed kits compatible with the device.