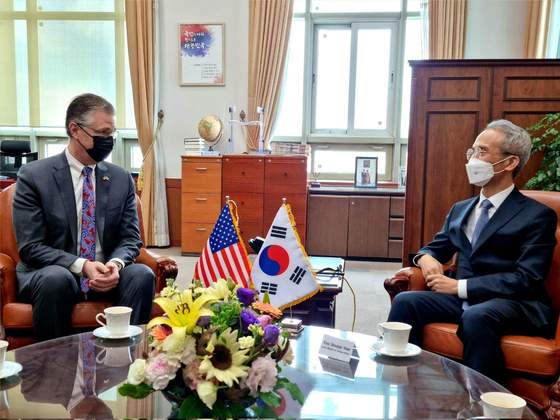 
Assistant Secretary of State for East Asian and Pacific Affairs Daniel Kritenbrink in his first visit to Seoul since his confirmation met with his counterpart at the Foreign Ministry and officials in the trade and industry sector to discuss supply chain issues.

“They discussed issues related to the Korean Peninsula, such as a plan to resume dialogue with North Korea as soon as possible, and issues related to the ROK-U.S. alliance, such as the global supply chain crisis, climate change and response to Covid-19,” a Foreign Ministry official told a group of reporters in Seoul on Thursday, in speaking of Kritenbrink’s meeting with his counterpart, Deputy Foreign Minister for Political Affairs Yeo Seung-bae, at the ministry headquarters in Seoul.

Kritenbrink also met with Lee Seong-ho, deputy foreign minister for economic affairs, on Thursday, and is scheduled to meet with Jung Dae-jin, a director-general of the Ministry of Trade, Industry and Energy, during his visit through Friday.

Supply chain resilience has been a topic repeatedly emphasized by the Joe Biden administration in its dealings with South Korea and the Asia Pacific region, including during Biden's meeting with President Moon Jae-in in Washington in May, and also recently during a multilateral meeting on the global supply chain hosted by Biden at the G20 summit in Rome last month. The Biden administration’s goal is to reduce the supply chain reliance on China.

Shortly after Kritenbrink met with Yeo, the U.S. Embassy in Seoul posted on Twitter, “The [U.S.-Korea] Alliance is able to tackle the world’s most pressing challenges. [They spoke] today about how our Alliance can continue to promote the rules-based international order in the Indo-Pacific & beyond.”

"Rules-based order" is a phrase often used by the Biden administration when referring to its competition with China, such as when Secretary of State Antony Blinken told CBS in May, “Our purpose is not to contain China, to hold it back, to keep it down: it is to uphold this rules-based order that China is posing a challenge to.”

Kritenbrink, nominated in March by President Biden and confirmed by the Senate in September, has extensive experience in China, including his time as deputy chief of mission at the U.S. Embassy in Beijing from 2014 to 2015. Fluent in Chinese and Japanese, he also served as director of the Office of Chinese and Mongolian Affairs at the Department of State.

The assistant secretary was in Japan from Sunday to Wednesday before flying to Korea.

Kritenbrink also met with Lee Jae-myung, presidential contender of the ruling Democratic Party, at the party’s headquarters in Yeouido, western Seoul, on Thursday.

“I hope that the Korea-U.S. alliance will continue to grow and develop as an economic alliance and a global partnership in the future,” Lee reportedly told Kritenbrink, to which Kritenbrink emphasized that the sole reason for his trip is to show Korea how much the United States counts on it as a partner.

Kritenbrink was also scheduled to meet with presidential contender of the opposition People Power Party, Yoon Seok-youl, on Friday.