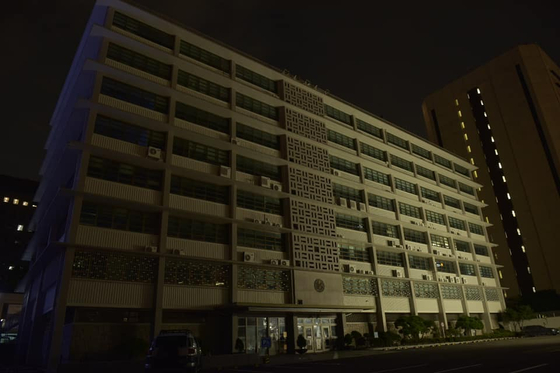 File photo of the U.S. Embassy in central Seoul on Aug. 21. All lights in the building were turned off to participate in a national lights-out campaign to conserve energy. [FACEBOOK ACCOUNT OF U.S. EMBASSY SEOUL]


The U.S. Embassy in Seoul refuted media reports of an alleged hit-and-run by American diplomats on Wednesday afternoon.

“The U.S. Embassy disputes the account of this incident as reported in the press,” the embassy said in a statement on Thursday. “We trust that the competent ROK law enforcement authorities will conduct a thorough and fair investigation of the matter, and we will refrain for providing further comment until that investigation has been completed.”

Local media outlets including Chosun Ilbo reported on Wednesday that a vehicle with four American diplomats, including the driver, had bumped into a cab while on the road near the No. 3 Namsan Tunnel in Yongsan District, central Seoul, around 5:35 p.m. that day.

Rather than pulling over to try to resolve the accident, the vehicle reportedly kept on driving toward the American military base in Yongsan District, until it reached one of its entrances. The cab driver reportedly called the police and followed the vehicle until it, too, reached an entrance of the base.

According to local media reports, the police, arriving at the scene, asked the diplomat behind the wheel, reportedly a second secretary, to roll down the window for a breathalyzer, but he allegedly refused. The police said they let the diplomats go after confirming their diplomatic identity.

Diplomats, by the Vienna Convention on Diplomatic Relations, are protected from lawsuits or prosecution in their host nation during their service.

The police have reportedly requested the U.S. Embassy in Seoul for cooperation on investigations.

Earlier this month, a family member of a Dutch diplomat in Seoul got into trouble for allegedly hitting a Korean citizen with his car.

According to the police, on Nov. 1, the Dutch citizen, a man in his 60s, got into a heated argument with a Korean citizen near the Hyatt Hotel in Yongsan District over parking issues. In the midst of their argument, the Korean got out of his car, at which point the Dutch man allegedly hit the man with his car. It wasn’t clear if the Korean man was injured.

The Dutch citizen reportedly went in for questioning at the Yongsan Police Precinct on Nov. 7.

"We are aware of an incident that took place […] involving the partner of one of our staff," said the Dutch Embassy in Seoul in a statement it released on Instagram on Nov. 4. "The Netherlands embassy and its staff is aware that we must follow local regulations and will fully and actively cooperate with the police investigation."