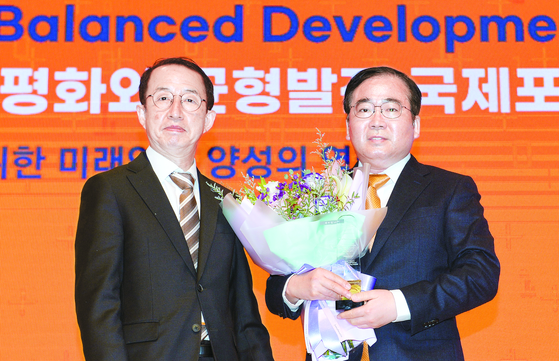 The Presidential Committee for Balanced National Development, a government body under the direct authority of President Moon Jae-in that deals with regional growth and development, created the prize this year to recognize those who contributed to peace and development in Northeast Asia.

The prize was presented to the foundation's director, Lee Ha-kyung, by the committee’s chairman, Kim Sa-yeol, at the presidential committee's 3rd Annual East Asia Peaceful and Balanced Development Forum.

In his remarks, Kim said the committee selected the Korea Peace Foundation as the inaugural recipient of the prize out of 155 organizations “in light of its achievements and systematic work towards solidarity, empathy and co-prosperity” on the Korean Peninsula.

The committee added that the Korea Peace Foundation was selected for its organizing of various academic forums and peace overtures that contributed to reconciliation between the two Koreas.

Under its previous iteration as the Korea Unification Forum, the group also hosted a 1995 debate on reunification in Beijing, where it invited not only South Korean scholars from both sides of the political spectrum, but also foreign experts and officials and academics from North Korea. 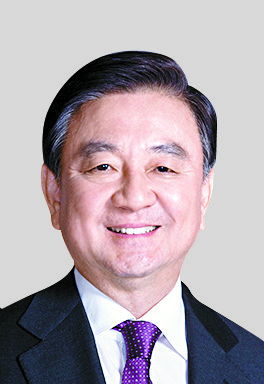 For its partial function as a policy think tank, the foundation has also outlined various proposals for denuclearizing the Korean Peninsula, some of which later became government policy.

As tensions grew after Pyongyang admitted to running a secret uranium-enrichment program in 2002 and withdrew from the Non-Proliferation Treaty in 2003, the Korea Peace Foundation was also the first organization to propose the Six-Party Talks and a three-stage approach to achieve peaceful denuclearization of the North.

The foundation followed up the plan in 2012 with what it called the Korean Peninsula cooperation process, a road map to achieve peace in the region and economic cooperation between the two Koreas.

Professor emeritus Paik Young-chul of Konkuk University, who serves as the foundation’s standing advisor, called the group “unique among domestic organizations in that it gathers both conservatives and progressives [in addressing North Korea-related issues.]

“The foundation began as a private company, but we became a foundation in 2017 as we focused on both academic and practical activities in order to work toward inter-Korean peace.”

Paik said after the foundation received the award that the organization would continue “various activities to pursue peace on the Korean Peninsula,” adding that without peace in the region, “there is no peace in the world.”