DP's Lee said he would accept probe ― with strings attached

DP's Lee said he would accept probe ― with strings attached 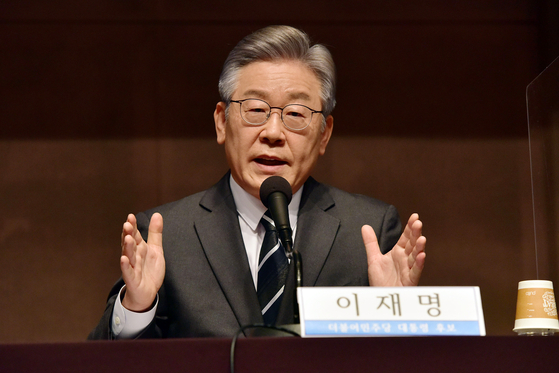 Speaking at the Kwanhun Club’s open debate forum at the Seoul Press Center in Jung District, central Seoul, the former Gyeonggi governor said that he would accept an independent counsel probe or “any other way to clarify the truth” behind the allegations surrounding the Daejang-dong development in Seongnam, Gyeonggi, should there remain “any unanswered questions or suspicions after the prosecutors conclude their current investigation.”

However, Lee’s proposal did not come without conditions. In particular, the DP candidate said a new probe into the scandal should also look into suspicions that Yoon covered up early signs of corruption in the development back when he was in the state prosecution service and allegations that the PPP-controlled Seongnam city council prevented the project from relying solely on public money in order to benefit private investors.

Lee also rejected Yoon’s proposal to have the PPP’s proposed independent counsel probe examine suspicions behind the ownership of the companies that invested in the project.

Yoon rejected Lee’s conditions for a special counsel probe and continued to say that the probe needs to address all the allegations surrounding the Daejang-dong development.

Allegations concerning the Daejang-dong project focused closely on a former aide to Lee, Yoo Dong-gyu, who served as the city-owned Seongnam Development Corporation’s former acting president and is accused by prosecutors of setting up the project’s profit distribution scheme to be favorable to Hwacheon Daeyu, a small asset management company owned by former journalist Kim Man-bae.

Kim previously interviewed Lee in 2014, when Lee was Seongnam’s mayor.

While the ruling DP’s floor leader Yun Ho-jung said Thursday that he will not turn down negotiations if the PPP contacts him to push an independent counsel probe bill through the National Assembly, rank-and-file DP members appeared nervous over the direction an independent counsel probe might take, and the potential consequences for the party’s prospects at the polls in March.

One DP member, who was part of Lee’s camp during the DP’s primaries, said that many party members had not forgotten the political fallout of the so-called Druking public opinion-rigging scandal in 2018, when the DP asked the police to investigate what it called “fake news” undermining the party.

In that scandal, the party alleged that some bloggers were illegally using software to increase the number of “likes” on online comments attacking Moon on news articles.

However, the probe turned on the DP after it was revealed that the bloggers, led by an individual nicknamed Druking, was attacking Moon and his government after South Gyeongsang Gov. Kim Kyoung-soo failed to keep his promise to provide Duking’s acquaintance with a government job.

As a result of the independent counsel probe, Kim was jailed for two years in 2019 and deprived of his post by the Supreme Court.