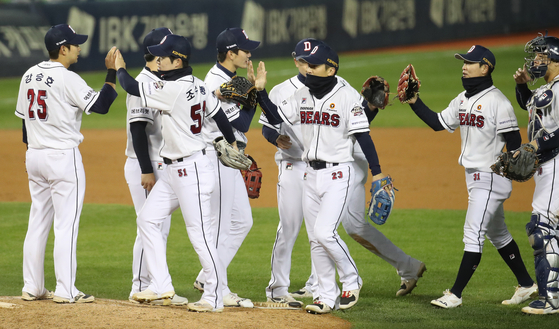 The Doosan Bears celebrate after beating the Samsung Lions in the second round of the playoffs on Wednesday at Jamsil Baseball Stadium in southern Seoul. [NEWS1]


The Doosan Bears beat the Samsung Lions 11-3 on Wednesday to become the first team in the history of the KBO to reach the Korean Series for seven consecutive years.


The Bears cruised past the Lions, taking a comfortable 5-0 lead in the first two innings and extending that to 9-1 by the end of the fourth. Samsung rallied a bit in the last two innings, but Doosan kept up the pressure to take the game and win the series 2-0 for a ticket to the 2021 Korean Series.

Wednesday's win follows a tighter 6-4 victory on Tuesday, when Samsung briefly took a 2-0 lead in the first before falling behind in the second and staying there for the rest of the game. 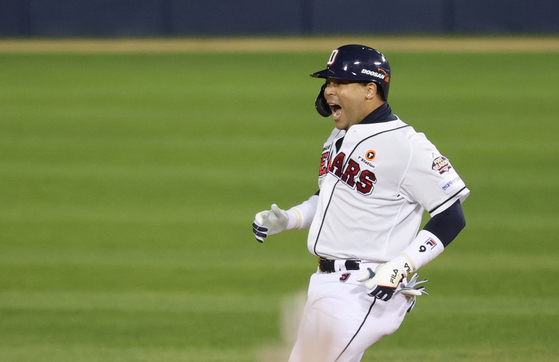 Jose Fernandez of the Doosan Bears runs the bases after hitting a two-run double against the Samsung Lions in the second round of the 2021 KBO playoffs at Jamsil Baseball Stadium in southern Seoul on Wednesday. [YONHAP]


For Samsung, Wednesday's big loss ends a postseason run that had already run into issues before it even began.

The Lions took a sole lead in the KBO in the final weeks of the 2021 season, only to have the KT Wiz catch up at the very end of the season to force the pennant race to a special tiebreaker game. Samsung lost that game 1-0, losing out on a guaranteed spot in the Korean Series and instead ending up with a ticket to the playoffs.

From there it was all downhill. Samsung ended up facing a runaway Doosan squad in the playoff and could do little to stop the Bears' growing momentum. That it was Doosan, the very team that took them down in 2015, ending a six-year Korean Series run, only added insult to injury.

But while Samsung's story ended abruptly, Doosan still look like they're just getting warmed up.

Doosan have for years been known as the KBO's quintessential fall baseball club. Whatever happens during the heat of the summer, the Bears come alive as the temperature drops. By the time the postseason arrives — and in recent years it has been held later and later — the Bears are just about warmed up and ready to offer a serious obstacle to any challengers.

But this year the Bears were expected to have lost some of that bite.

Doosan manager Kim Tae-hyoung has been dealing with the baseball version of a brain drain for years now. Doosan, home to an especially strong development system, has seen one or two key players picked off each year through free agency. But while the loss of Min Byung-hun in 2017 or Yang Ui-ji in 2018 might have hurt, 2020 proved especially devastating. 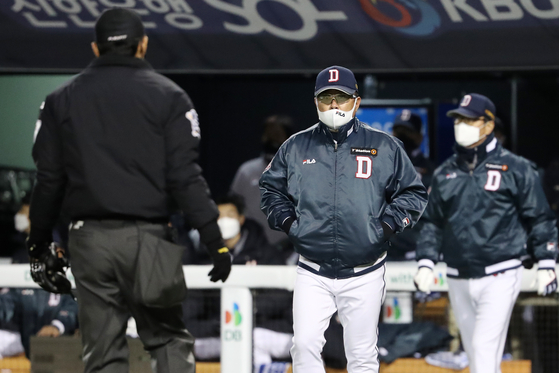 Doosan Bears manager Kim Tae-hyoung, center, protests against a call during a playoff game against the Samsung Lions at Jamsil Baseball Stadium in southern Seoul on Wednesday. [NEWS1]

Those two big losses, combined with the departure of foreign ace Chris Flexen, were expected to seriously hamper the Bears chances this season.

And on paper, they did. Doosan finished the regular season in fourth place, a position they only secured in the final couple of weeks of play. The Bears finished the season with a 71-65-8 line, by far their worst results in their seven-year Korean Series run.

Those results are amplified by rules in place for the last two seasons that limit extra innings and force more ties, but the difference is still markedly clear. The closest Doosan has come to 71 wins in a season was 79 last year and in 2015. In 2018 and 2016, the Bears managed 93 wins.

But despite the numbers, the Bears appear to be just as dangerous in the playoffs, winning the Wildcard Series and two rounds of playoffs to earn a spot in the championship.

Look a little closer, however, and the 2021 Bears are a very different beast to their predecessors. The steady syphoning of sluggers in recent years has had an impact, and the Bears are no longer just smashing their way through their opponents.

Instead, this is a scrappier Doosan squad. Throughout the playoffs, they've played station-to-station baseball, grinding their way around the diamond with contact hits into the gap rather than lining up the runners and waiting for Fernandez to smash them home. Even the Cuban powerhouse seems content to play small ball, providing clutch singles and doubles rather than the home-run-or-bust approach he sometimes defaults to.

The credit, once again, goes to Doosan manager Kim Tae-hyoung and his coaching staff. Kim has led Doosan to all seven Korean Series — in fact, he's never coached a season when the team hasn't reached the championship — and this year he appears to have managed to pull off a rebuild without really breaking the team's stride.

But whether Doosan can go the distance remains to be seen.

The Bears enter the Korean Series, which starts at 2 p.m. Sunday, with incredible momentum. In seven playoff games so far, Doosan have scored 55 runs, winning five games and dropping two. They have more recent history in the tournament than any other team and, though the squad has changed a lot, the majority of the lineup are used to playing on such a big stage.

The newer, scrappier Doosan also poses a different kind of threat. The Bears have approached the last six Korean Series like their apex predator namesake. Prioritizing strength and power, Doosan have looked for big moments and hoped to capitalize on them. The 2021 team is different. These Bears know they've taken some hits this year, they've been backed into a corner and they appear to be willing to do whatever is needed to grind out a win.

The Wiz, on the other hand, approach the Korean Series fresh. The Suwon club has had more than two weeks to rest and train following the end of the regular season, and while they may lack the Bears' momentum, they've had plenty of time to hone their skills.

KT are also unpredictable. This year marks the first time in the club's short history that the Wiz have earned a spot in the championship series. How well the squad will handle the pressure on the KBO's biggest stage will likely decide the winner.

But unlike Samsung, the LG Twins and Kiwoom Heroes, the Wiz have the numerical advantage over the Bears. KT are the only of the playoff clubs to have beaten Doosan on head-to-head record this season, winning nine games and dropping seven with no ties. If the Wiz can repeat that success, the trophy will be theirs.