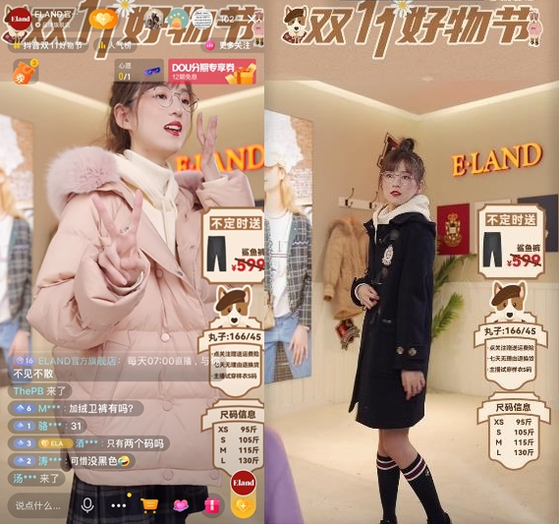 The Singles Day Shopping Festival, started by Alibaba on Nov. 11, 2009, has grown into the biggest day of the year for Chinese online retailers, including JD.com and Douyin, the Chinese version of short video-sharing app TikTok. Both apps are made by Beijing-based Bytedance.

Singles Day is supposed to be an anti-Valentine's Day. Nov. 11 was chosen because its numerical form is four ones, representing singles.

Its brands include The History of Whoo, O Hui, SU:M37 and belief.

Sales were led by The History of Whoo, which chalked up 329.4 billion won in sales on Alibaba and Douyin, up 61 percent on year.

“The growth of the online shopping market in China is seen to be a contributor to the record sales,” said Han Jae-min, a spokesperson for LG Household & Health Care. “We focused on Douyin this year, as live commerce is becoming a primary channel for online sales.”

Live commerce is similar to home shopping, but streamed online.

E-commerce sales in China are expected to see 17.2 percent growth in 2021 to 13.8 trillion yuan ($2.16 trillion), according to GlobalData’s E-commerce Analytics.

Though LG Household & Health Care’s cosmetics reported record sales on Singles Day, its beauty division saw on-year sales decline 10.2 percent to 1.03 trillion won in the third quarter. The History of Whoo only grew 4 percent on year in China in the third quarter, according to a report from Hana Financial Investment.

E-LAND said sales from its kids’ brand paw in paw led the growth.

“Building an infrastructure that matches the speed of Chinese e-commerce’s rapid growth is the key,” said a spokesperson for Eland.