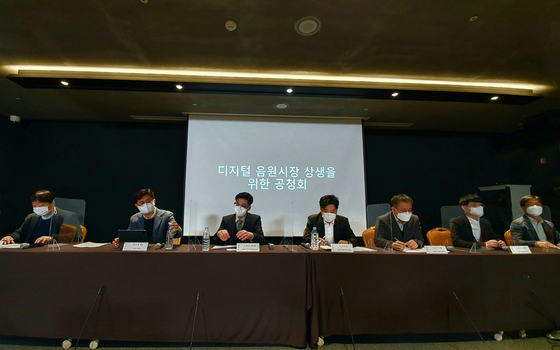 
Five organizations gathered at Coex in southern Seoul on Friday to discuss major issues that the Korean digital music market currently faces. The main point of contention was the method to evaluate copyright payments to artists.

The main topic presented was how to determine the amount of copyright payments that go to artists for music streaming and downloads. The "proportional distribution" method takes the total sum of payments from all users of a streaming platform, then distributes the money to artists in proportion to how many times their songs were streamed. Meanwhile, the "per user" method evaluates the copyright payment based on how many times an individual user streams an artist's music.

As of now, Naver Vibe is the only Korean music streaming platform to adopt the per user method.

The matter has become increasingly complex since the emergence of seuming, or K-pop fan slang derived from streaming, which refers to a fandom aggressively streaming songs by its favorite artist non-stop in order to bump up the songs' rank on music charts — even going to sleep with the music streaming platform on.

"As K-pop is spreading across the world, so is the fandom culture," said Secretary General Choi Kwang-ho of the KMCA. "Statistics show that so-called 'seuming attacks' are no longer just a local problem but are also affecting the Billboard charts nowadays. As a result, there are more questions about whether it's right to continue to pay the artists based on the total number of streams."

Not only does such mass streaming distort music charts, it can actually cause serious financial difficulties for less-mainstream artists since a small number of top artists with large loyal fandoms end up taking most of the revenue.

At the same time, Lee added he cannot "strongly push for" the per user method considering factors such as technological difficulties. Analyzing each individual user's streaming requires more detailed data analysis, thus switching to the per user method needs time and money for increased IT support, according to Kwon Oh-hyun of Genie Music.

"The proportional distribution method also protects artists with regulations such as a minimum price for a song," Kwon added.

"Some say there are other methods to filter out mass streaming," said Kim Kwan-ki of RIAK. "As of now, RIAK is neutral and collecting opinions to carefully consider the matter."

Representatives concurred that as of now, a transition period of both methods coexisting may be the step to start with.

"This hearing is not about pushing for a single definitive method, but opening up a discussion on what is happening in the music industry right now," said Secretary General Shin Jong-gill of LIAK. "We're saying we need to look for a solution together and discuss a transitional period."