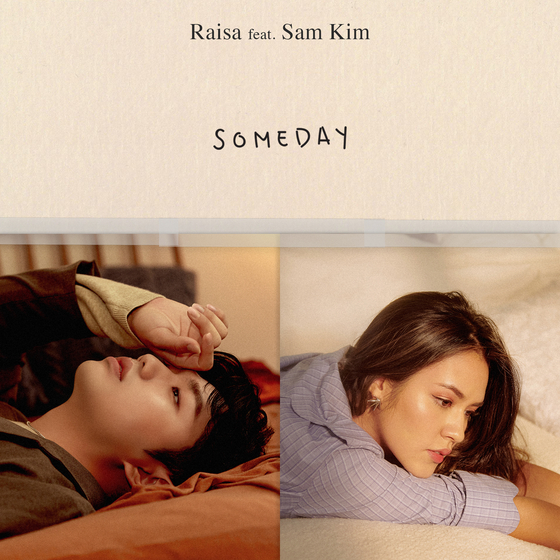 The press conference for “Someday” was held on the same day in Jakarta, Indonesia and also online. Raisa attended the conference while Kim joined via video call from Korea.

“The collab with Sam happened since I’m a huge fan of Sam,” Raisa said. “I’ve been referencing Sam’s music a lot to my musician friends. Simply because I love Sam’s music, I said [to my agency], ‘Why don’t we do a collaboration with him?'"

“Ever since we started exchanging messages on Instagram, talking about our music and personal experiences, we became friends,” said Kim. “For me, this was an amazing experience to work with someone outside of South Korea.”

The English-lyric song was under production for quite some time, partially due to the Covid-19 pandemic.

“The first time we video called was one and a half years ago,” Raisa said. “It was during Covid times, so it [communication] was not easy. We really took our time and we wanted the best for the song. That’s what I love most about this collab; we really took our time. I’ve done a lot of collaborations before, but this took the most interactions. For ‘Someday,’ we video called about ten times to get it right. It was super active and very, very personal for both of us.”

“I remember asking her a lot of questions [like] ‘What do you want to sing about?’’” said Kim, who wrote the song and lyrics along with Raisa. “I remember hearing her voice for the first time and immediately getting the melody. I could hear the melody I wanted Raisa to sing.”

The sentimental R&B ballad is centered on a couple who wants to open up to each other but whose egos get in the way. The music video was filmed with Raisa in Indonesia and Sam in Korea, without the two artists meeting in-person to film due to the Covid-19 pandemic.