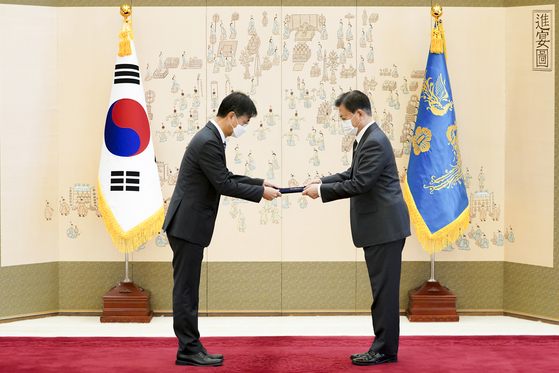 President Moon Jae-in presents a letter of appointment to Choe Jae-hae, the new head of the Board of Audit and Inspection (BAI), in a ceremony at the Blue House Friday. [NEWS1]

President Moon Jae-in appointed Choe Jae-hae chairman the Board of Audit and Inspection (BAI) in a ceremony at the Blue House Friday.

Choe previously served on the agency’s board and fills a position left vacant for over four months since the resignation of Choe Jae-hyeong.

Moon named Choe Jae-hae to head the post in September and presented Choe with a letter of appointment in a ceremony Friday.

According to Blue House spokesperson Park Kyung-mee, Moon said, “Chairman Choe is the first internal director in the 73-year history of the Board of Audit and Inspection. He has been recognized for his abilities and built trust through working at the BAI for many years.”

Moon “emphasized the independence and political neutrality of the BAI” to Choe, said Park.

Choe in turn replied, “While active administrative support is institutionally backed well, if there are any aspects that are not being reflected, I will take good care of it.”

He added that he will carry out the duties of the chief with “a great sense of responsibility,” the Blue House added.

Former top state auditor Choe Jae-hyeong resigned in late June to contest the presidential nomination of the main opposition People Power Party (PPP) with six months left in his four-year tenure. He did not win the nomination.