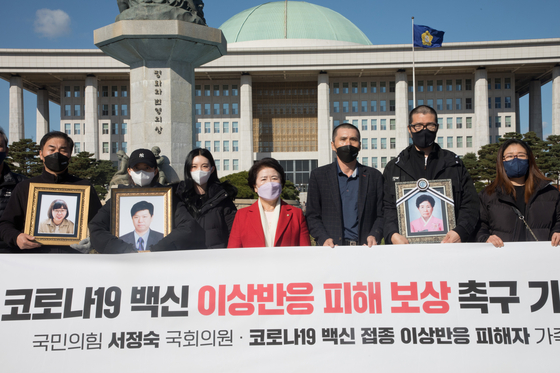 An association of victims of Covid-19 vaccines holds a rally at the National Assembly in western Seoul to demand more compensation for damages believed to have been caused by inoculations. [NEWS1]

A 22-member Covid-19 vaccine safety committee launched Friday to study the adverse side effects of inoculations.

The committee held a press briefing after its launch and said it plans to prepare a scientific standard to evaluate the causality between Covid-19 vaccination and adverse reactions "to relieve social anxieties."

The committee is operated independently by the National Academy of Medicine of Korea, and includes experts in the medical field. It is independent of the government,

The chair of the committee, Park Byung-joo, vice president of the National Academy of Medicine, said at the briefing at the government complex in central Seoul, "In order to find a basis for causality to adverse reactions, we will try to provide accurate information by analyzing overseas research results and domestic vaccination data, reported cases of side effects, medical treatment information, and death statistics."

It is divided into three subcommittees on epidemiology, clinical practices and communication, and 11 subcommittees.

It also plans to form an expert advisory committee following the recommendation of the Korea Disease Control and Prevention Agency (KDCA).

The government has paid compensation to victims if there was sufficient causality proved after reviewing individual cases, in accordance with international deliberation standards, through a damage compensation committee. This committee is comprised of 15 experts including clinical doctors, forensic scientists, infectious disease experts, lawyers and experts recommended by civic groups.

Park said that the vaccine safety committee's research results will be delivered to the KDCA and provided to the damage compensation committee for use as reference when evaluating individual cases.

On the same day, an association of victims of Covid-19 vaccines held a press conference at the National Assembly in western Seoul to demand more compensation for damages believed to have been caused by vaccinations. 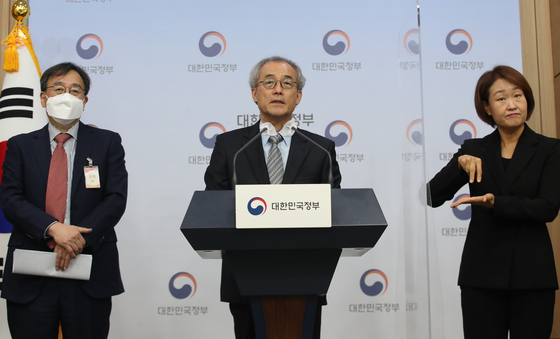 Park Byung-joo, vice president of the National Academy of Medicine of Korea, speaks at a press conference after the launch of a new 22-member civilian Covid-19 vaccine safety committee, which he chairs, Friday at the government complex in central Seoul. [NEWS1]

The country reported 2,368 new Covid-19 infections, raising the total caseload to 390,719, according to the KDCA Friday. Of these cases, 2,358 were domestic infections and 10 were imported.

There were 18 more fatalities, raising the total death toll to 3,051.

The number of patients in critical condition hit a record high of 475.

Cases have remained over 2,000 for three consecutive days, while the number of critical patients reached 400 last Saturday, the highest since last August, and has continued to break records this week, reaching 460 on Wednesday and 473 on Thursday.

The government believes it can stably manage up to 500 severe cases under the current medical system.

Of domestic cases, 949 were in Seoul, 791 in Gyeonggi and 120 in Incheon, which comprise the metropolitan area, and infections were found in all 17 provinces and cities nationwide.

Korea kicked off the first phase of a three-phase of "With Corona" scheme at the beginning of the month for a gradual return to normalcy. Authorities say it is unclear if the country can move to the second phase next month as planned with the current rise in cases.