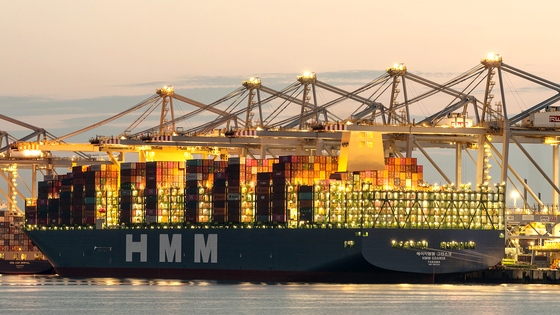 HMM vessel at Port of Rotterdam in the Netherlands [HMM]

HMM, the largest container shipper in Korea and No. 8 globally, reported record quarterly earnings in the July-September period. Consolidated net profit was up 9,240 percent to 2.3 trillion won ($1.95 billion) on sales that climbed 133.7 percent on year to 4.02 trillion won.

Pan Ocean, which primarily transports bulk cargo, recorded an earnings surprise in the third quarter, with 179 billion won in net profit, up 325 percent on year, on sales that jumped 109 percent on year to 1.3 trillion won.

Bulk cargo is commodity cargo that is transported unpackaged in large quantities, unlike container cargo, which is shipped in large standardized, sealed containers.

Korea Line, which also primarily transports bulk cargo, is projected to report 294.4 billion won in third quarter sales, up 34 percent on year, according to a report from Korea Investment & Securities. Operating profit is estimated to jump 32 percent on year to 53.2 billion won, though a spokesperson said its earnings are not significantly affected by the latest shipping boom as it signs long-term contracts that last up to 25 years.

A reason for the improved earnings is the rise in freight costs from port congestion.

The Shanghai Containerized Freight Index (SCFI), an index of freight rates for export container ships from Shanghai, has been on the rise since last year. As of Nov. 5, the index reached 4,535.92, up more than 170 percent on year. The index has been rising almost every week.

“The biggest reason behind the good earnings is the port congestion, especially in the United States,” said Kim Seong-min, a spokesperson for HMM. “The demand for container cargo transportation from China to the United States jumped following the Covid-19, as people purchased more from using government relief funds. Recently, lack of truckers in the United States further contributed to containers being piled up at ports, creating a vicious cycle.”

The American Trucking Association estimates that the United States is short 80,000 truckers – an all-time high for the industry. The figure is a 30 percent increase from before the pandemic.

In addition to the port congestion, China’s trade dispute with Australia contributed to the rise in the Baltic Dry Index (BDI), a benchmark index of average prices paid for the transport of dry bulk materials.

The BDI started to rise rapidly this year. The index rose as high as 5,650 on Oct. 7, up almost 180 percent on year. Though it has collapsed since then.

From January through May, Korea received 17.7 million tons of coal from Australia, which is the greatest January-May total in more than 10 years, according to a report from London-based Argus Media, which reports on global energy and commodities markets.

“Although the market conditions remain favorable, shipbuilding orders have remained low because of stricter environment regulations,” said Kim Young-ho, an analyst at Samsung Securities, about Pan Ocean. “This should lead to easing oversupply through next year, propping up freight rates.”

Freight costs could decline starting in the fourth quarter, as port congestion in the United States could be partially resolved.

“The number of containers at U.S. ports last week reached 1.74 million TEU (twenty-foot-equivalent unit), down 2.9 percent from its peak,” wrote Hwang Eo-yeon and Song Young-hoon, researchers at Shinhan Investment, in a report on Thursday. “Gate hours at Long Beach [and Los Angeles] ports have been extended [since mid-September]. After the fourth quarter, the actual number of cargoes shipped is expected to rise from the increase in frequency of sailings.”

Despite the high earnings, shares of the shipping companies have been sliding recently.

HMM’s price may have been influenced by the exercise of conversion rights on a bond.

The state-run Korea Development Bank exercised HMM convertible bonds worth 300 billion won into stock in June and owned 24.96 percent of the company shares as of the third quarter.

Converting bonds into shares raises the total number of HMM shares outstanding, thereby diluting the value of each share.

As for Pan Ocean, China’s scaling down of its steel sector in a bid to curb pollution is expected to reduce the shipping of iron ore, a raw material for steel. China’s sluggish real estate market could also reduce demand for commodity shipping, according to analyst Bae from Meritz Securities.