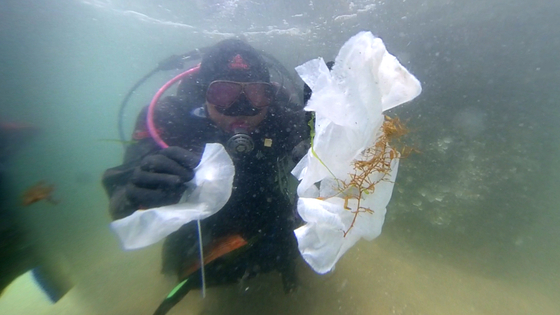 A diver finds wet wipes and other plastic waste in the ocean off the coast of Tongyeong, South Gyeongsang, in June. [JOONGANG ILBO]

Choe prides herself on using fewer than other mothers she knows. Some families go through several packs of wet wipes a week.

Despite enthusiasm for the zero-waste movement in Korea, many people like Choe can't do without disposables like wet wipes. Some are not even aware that wet wipes are made of plastic, are not biodegradable and end up contributing to plastic pollution and marine litter. Because they resemble tissues, many people think they're not so bad for the environment.

While natural pulp can be used, most wet wipes are made of polyester, rayon, or polypropylene.

"I didn't know wet wipes contain plastic," said Choe, noting she had been more worried about their chemical content. She said she would have reconsidered wiping down her babies with plastic if she had known earlier.

"I would say I'm environmentally conscious in that I don't want to use more than necessary," she said. But as a busy mother raising two young boys, she added, "I don't want to be inconvenienced either."

Choe recognized that more and more people are turning to the plastic-free lifestyle. "I have a friend who always carries around a spoon," she said, "so she doesn't have to use disposable plastic." 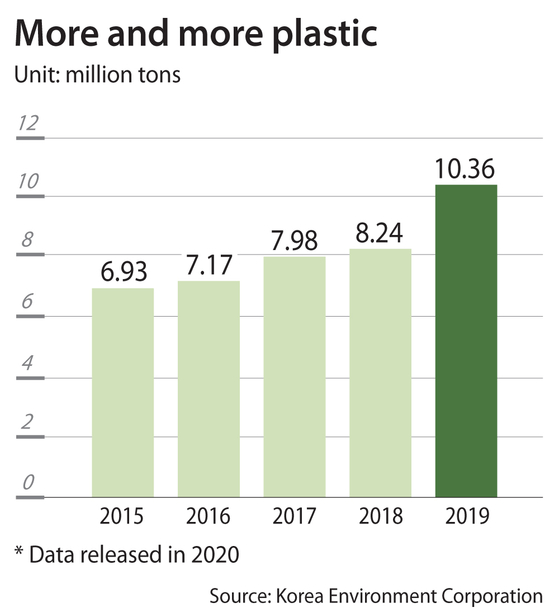 The Korean government has implemented stringent plastic-free policies, including banning single-use cups in cafes for dine-in customers since 2019, and will suspend the use of more disposable utensils such as plastic straws and stirrers starting next year. It will also prohibit the giving out of plastic bags, already banned in large retail outlets, from smaller retailers including bakeries next year. The public is generally supportive, with enthusiasm growing for the plastic-free movement.

"Plastics take hundreds of years to decompose," said Choi In-cheol, a senior researcher at the National Institute of Environmental Research (NIER). "In households, wet wipes are mainly thrown out in general garbage bags, but some are tossed in the toilet, which clogs pipes or pumps and causes sewage treatment facilities to malfunction."

Wet wipes are responsible for some 90 percent of malfunctions at sewage treatment plants, according to the K-eco. Wet wipes shouldn't be flushed down the toilet and should be sorted as general waste. Again, because of their resemblance to tissues, many people are not aware.

Operators of sewage treatment plants say wet wipes can require manual removal and force them to replace components and equipment such as screen devices.

Choi, who specializes in water supply and sewerage at the NIER's Environmental Infrastructure Research Department, said, "These wet wipes eventually are discharged into rivers or seas, where they break down and generate microplastics, which are recognized by small animals and fish as food and then absorbed by humans through the food chain."

Although there is no internationally agreed definition, small pieces of plastics less than 5 millimeters in length are collectively referred to as microplastics.

Such microplastics are not only harmful to marine life can be "a potential hazard to the human body," added Choi.

Plastics account for at least 85 percent of total marine waste, according to the United Nations Environment Programme (UNEP) in a report released in late October.

The UNEP report found that marine life, including shellfish, birds, turtles and mammals, faces the grave risk of toxification, behavioral disorder, starvation and suffocation as a result of plastic pollution. In water sources, plastic pollution can cause hormonal changes, developmental disorders, reproductive abnormalities and even cancer in living creatures.

Humans can ingest plastics through seafood, drinking water and even salt. Microplastics can penetrate the skin and are inhaled when suspended in the air.

Reducing plastic waste was part of the conversation at the United Nations Climate Change Conference, or COP26, in Glasgow, Scotland, this month where world leaders, experts and other stakeholders discussed global warming and reducing carbon emissions. One part of that process is transforming how people buy and consume products to live more eco-friendly, sustainable lifestyles.

The solution to reducing plastic waste is changing daily habits and raising public awareness to build a more mature, conscientious civic society, according to environmental experts.

Local governments in Korea are spreading the word.

The Changwon city government in South Gyeongsang held a street campaign on Nov. 4 calling to ban flushing wet wipes down the toilet, spreading word that they are made of synthetic fibers and do not decompose.

The Changwon government found that it cost 1.6 billion won ($1.3 million) a year to deal with flushed wet wipes at 16 sewage treatment facilities in that city alone.

"Rather than using wet wipes, which adversely affect environmental pollution, I would like to recommend making a habit of using a handkerchief, even if it is inconvenient," said Park Jong-ho, a spokesman of the Korea Environment Corporation.

Other alternatives to wet wipes include using reusable dish cloths, towels, or washing hands with water and soap.

"Currently, there is no technology or system to recycle used wet wipes, so there is no choice but to throw them out in general waste bags where they end up disposed in landfills or incinerated," said Choi.

However, he added, "Reducing microplastics is a simple task. First reduce the use of plastics, then dispose of used plastics properly, and finally manage the disposed plastics well, through collection, treatment and recycling."

He said that it is necessary to minimize the inflow of plastics into the environment, including oceans and the soil, by using practical technologies and policies to improve the recycling and reuse of plastics.

"Because this is something that people and industries have to go along with, it is necessary to change public perception," said Choi. "Based on this, we need to cultivate a more mature civic consciousness, striving to use less and properly dispose of plastics. In addition, the government should build good policies to incentivize citizens and industries to reduce waste and recycle correctly."