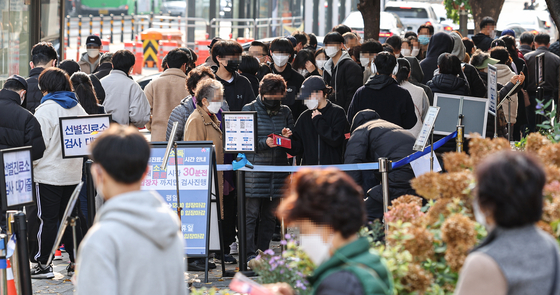 A Covid-19 testing site at a public health center in Songpa District, southern Seoul, is crowded with people trying to receive a virus test on Sunday morning. [YONHAP]


Korea's Covid-19 indicators showed a worsening pandemic, including a surge in newly reported fatalities and intensive care unit admissions over the weekend, less than two weeks after the country transitioned into its "With Corona" strategies.

According to the Korea Disease Control and Prevention Agency (KDCA), as of Saturday midnight, there were 483 Covid-19 patients in critical condition — referring to those who require oxygen treatment (such as high-flow oxygen therapy), mechanical ventilation or being put on a respirator, extracorporeal membrane oxygenation (ECMO) or continuous renal replacement therapy (CRRT).

The government believes it can stably manage up to 500 severe cases under the current medical system.

Health authorities are particularly worried about infections among the elderly aged 60 and above as this age group has been driving the rise in the country’s severe cases and deaths. Most elderly people in this age group were vaccinated in the first half of this year, but as the effectiveness of the vaccine decreases over time, breakthrough infections have been being reported recently at nursing homes and hospitals.

Officials earlier warned that if the virus situation worsens, a "circuit breaker" — referring to how a stock market circuit breaker suspends overheated trading — might be necessary for the "With Corona" liberalizations, especially if over 75 percent of intensive care beds are occupied. In that case, the recent relaxations of social distancing measures would be put on hold and restrictions reintroduced, in addition to expanding areas that require a vaccine pass.

The intensive care bed availability in Seoul and Incheon, however, have already surpassed the 75 percent threshold.

Seoul alone had 76.2 percent, or 263 out of 345 intensive care beds full as of 5 p.m. Saturday, according to the latest government data. Its neighboring port city Incheon also had 60 out of 79 beds full, recording a 75.6 percent occupancy rate.

With the greater Seoul area becoming the hot spot for new infections and hospitalizations, the government issued an urgent administrative order to secure more hospital beds in hospitals in Seoul, Gyeonggi and Incheon on Friday, just a day after officials stated there were “enough” hospital beds in the capital area.

The measure dictates seven general hospitals in the greater Seoul area, each equipped with 700 or more beds, to designate 52 hospital beds, or 1 percent of their total beds, for critically ill Covid-19 patients to better deal with the surge. But some are pointing out that hospital beds need to be prepared quickly, in line with the rapid rise of critically ill patients, seeing as it takes up to four weeks for the administrative order to come into effect.

Although the hospital bed crunch was more noticeable in the greater Seoul area, Son Young-rae, senior epidemiological strategist at the Central Disaster Management Headquarters, dismissed the idea of implementing stronger restrictions in Seoul and its surrounding regions, saying the government “isn’t considering partly activating the emergency plan” during a briefing last week.

Along with the increase in severe cases, the number of daily Covid-19 deaths in the country has remained in the double digits since Nov. 2.

The KDCA said 20 more people died from Covid-19 on Sunday, bringing the death toll to 3,103. The number of fatalities reached 32 on Saturday, the highest since the fourth wave of the pandemic, which started in early July.

Following the easing of virus curbs and the increase of social gatherings and travel under the new “With Corona” scheme from the beginning of the month, the country has been experiencing a continued rise in cases.

By Saturday’s end, 81.7 percent of Korea’s population had received at least one dose of a Covid-19 vaccine, while 78.1 percent had completed their vaccinations, according to the KDCA.

As deaths and hospitalizations are showing no signs of decline despite the high vaccination rate, health authorities said they are considering shortening the booster shot interval to five months instead of six.

Currently, the government has the booster shot schedule set for six months following the primary vaccine series, while employees and patients at nursing facilities and medical institutions can get boosters after five-months, and Janssen recipients and those with reduced immunity can get a booster from two months after their final jab. The government will announce its final decision on reducing the booster shot interval for the elderly within this week.

With infections and severe cases rising steeply, the government said Friday it “strongly recommends” minors receive Covid-19 vaccines; two months ago, they said jabs would not be mandatory for the age group as the benefits are not particularly high for healthy children and adolescents.

“Inoculations for adolescents have a greater benefit when considering various reasons such as infection risk and academic loss,” said Lee Ki-il, first control officer for the Central Disaster and Safety Countermeasure Headquarters, during Friday’s briefing.

“We have highlighted the fact that minors can make their choice autonomously, but we strongly advise they get vaccinated as the number of infected children and adolescents has been increasing recently,” Lee said, adding, “Currently, they can get inoculated with the Pfizer vaccine at any medical institution.”

The government on Friday also launched a 22-member Covid-19 vaccine safety committee to prepare a scientific standard to evaluate the causality between Covid-19 vaccination and adverse reactions "to relieve social anxieties."

The committee is operated independently by the National Academy of Medicine of Korea, and includes experts in the medical field.

The chair of the committee, Park Byung-joo, vice president of the National Academy of Medicine, said at a briefing, "In order to find a basis for causality to adverse reactions, we will try to provide accurate information by analyzing overseas research results and domestic vaccination data, reported cases of side effects, medical treatment information and death statistics."

The committee is divided into three subcommittees on epidemiology, clinical practices and communication, and 11 subcommittees, and it also plans to form an expert advisory committee following the recommendation of the KDCA.

Park said that the vaccine safety committee's research results will be delivered to the KDCA and provided to the damage compensation committee for use as reference when evaluating individual cases.