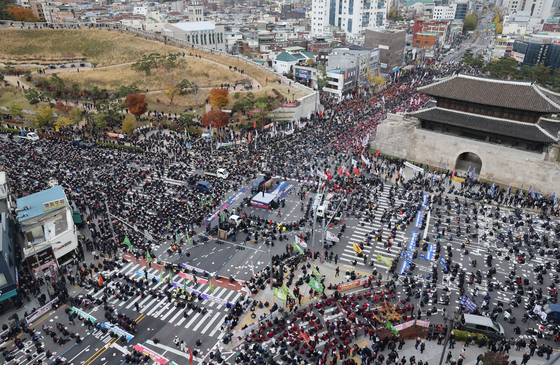 Approximately 20,000 members of the Korean Confederation of Trade Unions gather for a rally near Dongdaemun market on Saturday. [YONHAP]


The Korean Confederation of Trade Unions (KCTU) pushed ahead with a large-scale rally in downtown Seoul on Saturday to mark the 51th anniversary of the death of Chun Tae-il, a noted labor activist, despite police warnings that the gathering of 20,000 of the group's members was illegal.

The activists gathered near Dongdaemun market, the site where 22-year-old factory worker and activist Chun burned himself to death in 1970 to protest working conditions. Saturday marked the 51st anniversary of Chun's death.

Police immediately initiated a probe into the rally after it ended and plan to summon key members and union organizers for questioning on charges of violating Covid-19 rules and laws regulating public assemblies and demonstrations.

Although the KCTU originally planned to hold the rally at Gwanghwamun in the city center, the organization changed plans after police blocked the area with buses and fences to prevent people from gathering there.

The KCTU had submitted a permit application to the Seoul metropolitan government to hold the rally at Gwanghaemun Square in 20 groups with 499 members each, keeping the groups 70 meters apart.

The city government did not permit the rally to take place, considering it the same as a single rally of 10,000 people being held in the same place.

Media attention on the rally may have pushed the KCTU to change the plan after it drew negative scrutiny for scheduling a large demonstration in Gwanghwamun Square, a busy public plaza crisscrossed by tourists, government workers and white collar workers.

Public opinion is largely opposed to mass gatherings and protests during the pandemic.

The relocated rally caused severe traffic congestion at the Dongdaemun Station intersection as the police were forced to close roads to ensure the safety of protesters at the new gathering spot.

Protesters wore masks and no physical clashes between activists and police were reported.

During the rally, the KCTU demanded the wholesale revision of current labor laws and better working conditions.

Saturday’s rally comes after the Seoul city government filed complaints with police against all participants in an Oct. 20 labor rally organized by the KCTU on charges of violating the infectious disease prevention act.

The KCTU had staged a massive rally in central Seoul for about two hours as part of a one-day general strike on Oct. 20 to bring attention to labor issues in the lead-up to the 2022 presidential election.

About 27,000 unionists joined that rally, according to the KCTU.