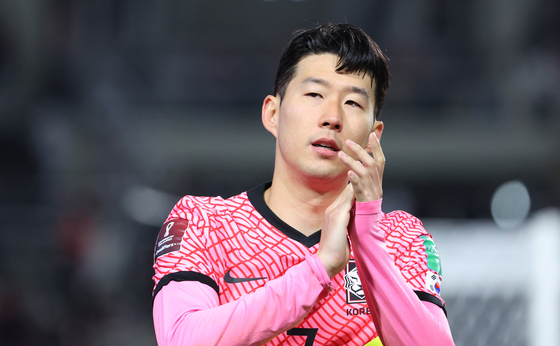 
Undefeated after five out of 10 matches in the final World Cup qualifying round, Korea looks to be in a prime position to receive a place in the tournament next year.

But team captain Son Heung-min isn't about to let his guard down. The Tottenham Hotspur star said Saturday he'd like to keep the pedal to the metal and have a strong finish to the qualifying stage.

"This is my third time playing in the final qualifying phase for the World Cup, and things have never been easy," Son told reporters at the National Training Center in Paju, north of Seoul, after a training session Saturday. "Our job isn't done. I want us to finish this with a flourish, and I'll prepare for every remaining match like it's the final."

In their most recent match, Korea blanked the United Arab Emirates (UAE) 1-0 on Thursday. Korea is in second place in Group A with 11 points from three wins and two draws, two points behind Iran and six points ahead of Lebanon with five matches remaining.

The top two countries from each of the two groups in this stage will advance to the FIFA World Cup in Qatar next year. The third-place teams will clash in a playoff, and the winner will then play in the last-chance intercontinental playoff.

Son experienced some rotten luck against the UAE, as he hit the post and the crossbar once each to see his two-match international scoring streak snapped.

Son looked particularly frustrated after the second miss, as he stayed on the ground and pounded on the field with his hand.

"I wasn't really that mad at the goal post. I was just sorry to my teammates," Son said. "It's not often in this stage that you'd get that many scoring chances in one game. I don't think I've ever received and missed that many chances. I felt terrible that I couldn't convert those opportunities."

Son was more aggressive with his shot selection against the UAE than in earlier national team matches. The knock against Son had been that he was trying to be too unselfish at times when playing for the country, instead of letting his scoring abilities shine through the way he does for Tottenham.

"I always try to make the best decision," Son said. "This time, it just happened that I was in a spot where I had to take those shots. And if I am in a situation where I'd be better off passing the ball to my teammates, I'll definitely do that."

Next up for  Korea is Iraq, a Tuesday kickoff in Qatar as the neutral venue. Iraq, 37 spots below Korea at No. 72 in the world, held the Taeguk Warriors to a scoreless draw here in September.

Korea had often had trouble scoring, despite playing mostly underdogs. It thoroughly dominated the UAE Thursday but had one goal to show for it. Korea scored more than once in only one out of five matches so far.
Son said the lack of goals isn't for any lack of effort.

"We're obviously not trying to win every match 1-0. One-goal leads are always tough to play with," Son said. "Our opponents work as hard as we do, and winning is more important than anything (regardless of the score)."

Son also brushed off concerns about his workload for the national team. He often handles huge minutes for Tottenham in the Premier League and then has had to take long flights to Asia to play World Cup qualifiers as well.

"Everyone who comes over from Europe does it, and I love playing these matches. No one is running me into the ground," Son said with a smile. "It's a privilege to play for the national team. I dreamed about it growing up, and it's incredible that I am living out that dream now."