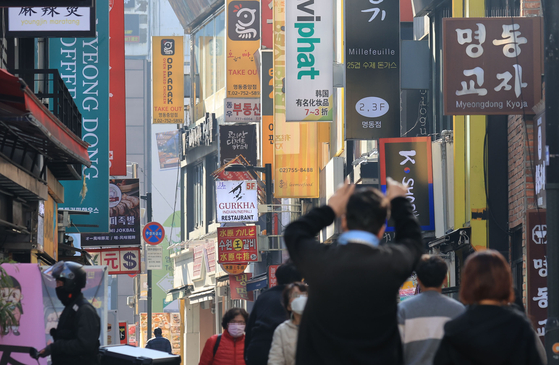 Restaurant banners in Myeong-dong, Seoul, on Monday. While the government eased social distancing regulations, lifting restrictions on business hours and allowing 10 people to gather, since this month, some businesses have yet to benefit. [YONHAP]

Small retail is back, with early numbers indicating that sales have recovered to pre-pandemic levels.

In the first week of November, the average revenue of small shops, including restaurants and cafes, was up 4.4 percent from the same period in 2019, according to Korea Credit Data on Monday.

The study was based on the credit card purchases at 850,000 stores nationwide.

The granular picture is not as encouraging.

Retail and distribution sales were up 11 percent, while services sales rose 9.4 percent.

For restaurants and cafes, the figure was down 3.1 percent.

In the last week of October, restaurant and cafe sales were down 7.3 percent compared with the same period in 2019.

In the first week of November, buffet restaurant sales were down 33.8 percent compared with the same period in 2019. In the last week of October, they were down 35.5 percent.

Hotel and travel-related service revenue was down 7.1 percent in the first week of November compared with the same period two years earlier.

Bar revenue grew 2.4 percent. It was down 18 percent in the last week of October compared with the same period two years earlier.

A recent survey conducted by the Korea Federation of SMEs found the majority of small shop owners are still skeptical about the eased regulations.

Of those surveyed, 62.4 percent said their monthly revenue will be a quarter or less of pre-Covid levels.

They are especially concerned with the high number of people still becoming infected with the virus.

The government late last month announced a three-phase plan for when more than 70 percent of the population is vaccinated.

From Nov.1, up to 10 people are allowed to gather at restaurants and cafes in Seoul, Gyeonggi and Incheon. For other regions, the maximum is 12.

Up to four in the groups can be unvaccinated.

The 10 p.m. limit on the operations of restaurants has been lifted.

The Korea Foodservice Industry Association said while the government's easing of social distancing regulations is good news for many small stores, the government needs to further lift its restrictions, such as the limiting of the number of customers.