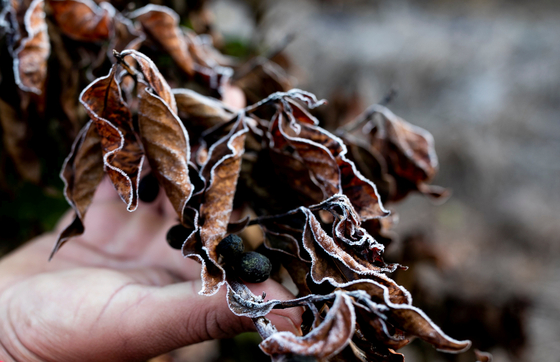 Arabica beans, 70 percent of all beans produced, have doubled in price over the past year and are now selling for about $2.2 per pound (454 gram).

General inflation is one driver, as coffee is a commodity that is very sensitive to global price changes and tends to swing disproportionately to the inflation indexes.

Prices have also been rising due to bad weather halting bean production in Brazil, the largest exporter of coffee, producing 30 percent of the world’s total. Coffee trees were hurt by a long drought and an unusual cold snap that brought temperatures in coffee-cropping areas such as Sao Paulo and Minas Gerais below zero degrees centigrade in late July.

Brazil farmers collected 30.7 million bags of Arabica through September, down 37.1 percent on year and a 12-year low. Production prospects will be lower in coming years considering newly-planted coffee trees will take three to five years to fully grow from seeds.

Vietnam, the second largest coffee producer and largest of robusta beans, had a hard time exporting its beans when the country was in lockdown in July and August. The country exported 100,340 tons of coffee in September, down 10.2 percent on month. 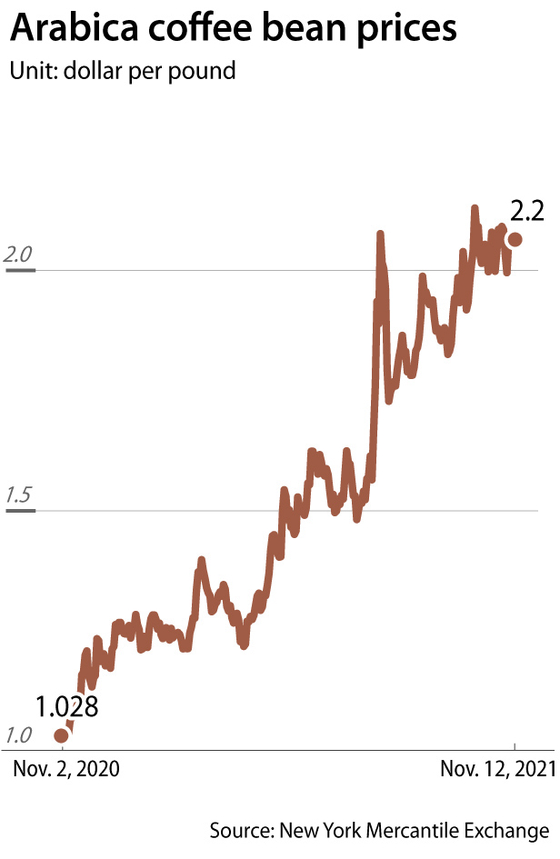 Korea has long been a coffee-loving country, and its increasing consumption will leave no choice but for coffee makers to purchase heaps of beans at an expensive price. Based on Korea Customs Service data, 176,648 tons of coffee beans were imported last year, up 28 percent on year. The imports were worth $737.8 million, up 35 percent on year.

Coffee prices aren’t affected yet due to cafes and coffee franchise companies mostly buying beans months ago. Bean prices are reflected in import prices some three to nine months later, and coffee drinkers may have to pay more for their coffee starting next year.

“The contract price will rise when we have to buy new beans,” said a spokesperson for a company that runs a cafe franchise. “We’re considering raising coffee prices because labor costs, which make up for about 30 percent of the coffee price, will rise next year due to increased minimum wage and so will other raw material prices such as milk.”

Affordable cafes that sell coffee for 1,000 won (85 cents) to 2,000 won a cup will be hit hardest, with rising bean prices leaving little room to pay for labor or other fixed costs. Non-franchise cafe owners who get beans in small amounts will also have to brace themselves as they have less in stock.

“The company that supplies coffee beans to us recently increased prices by some 20 percent,” said a 45-year-old owner of a small cafe, “Buying cheaper beans isn’t really an option because customers have high standards, and I don’t think I’ll be able to sell coffee at the price I offer considering rent, labor costs and coffee machine facility costs.”

'Tis the season for the Starbucks diary giveaway event