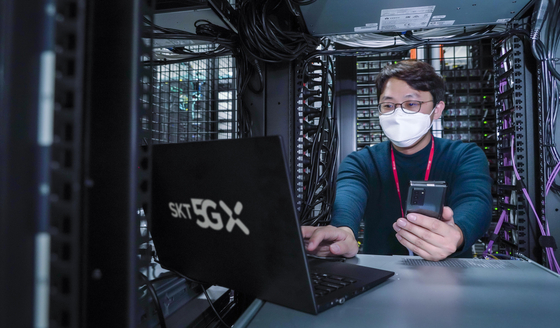 A worker at SK Telecom checks the new 5G core networks on Monday. SK Telecom said it has started developing the equipment required for 5G core networks entirely built in the cloud with an aim of commercializing the network architecture by early 2022. [SK TELECOM]


SK Telecom said Monday it has started developing the equipment required for 5G core networks entirely built in the cloud, with the aim of marketing the network architecture by early 2022.

A cloud-native 5G core network does not need to be updated or replaced when network improvements need to be made.

5G core networks that are currently being used also integrate cloud technology into their hardware, but their capacities are limited because they are not based solely on the cloud network system.

Cloud-native cores have been co-developed by SK Telecom and Sweden's Ericsson, which signed a business agreement in February 2019 for the enhancement of their cloud network technologies.

The three-year agreement was signed to collaborate on research and development of 5G standalone (SA) core network technology and architecture. Korean telecom companies have yet to migrate to the standalone mode — a network infrastructure exclusively dedicated to 5G — and presently offer limited in-building coverage.

The new network system will save time and money needed for replacing the hardware-based networks when cloud networks become the norm, according to SK Telecom.

They allow for faster upgrades and steadier network services for the users, while also saving time for network maintenance for the operator.

It will also increase the efficiency of its 5G traffic management by 50 percent, using the newest technologies, such as network route optimization and mass-flow control methods, the company said.

After the installation of the new core networks, SK Telecom will start a testing period to make improvements.