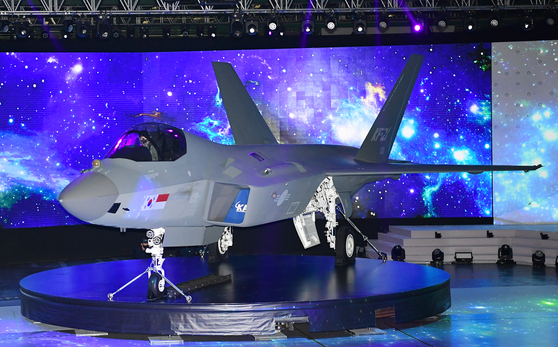 The KF-21 Boramae, a prototype of Korea’s first indigenous fighter jet, is shown an an event at the Korea Aerospace Industries’ headquarters in Sacheon, South Gyeongsang on April 9. [KAI]


Seoul and Jakarta on Thursday reached agreement on who will pay what in the joint development of the next-generation fighter jet KF-21, dubbed the Boramae.

Indonesia will end up paying much less, according to the Korean state arms procurement agency on Monday.

The agreement followed talks in Jakarta over Indonesia’s requrest for a 5 percent reduction of its 20 percent share of contributions to the jet’s development.

According to details of the renegotiated cost-sharing accord announced by the Korean Defense Acquisition Program Administration (DAPA) on Monday, the two countries decided to retain the cost-sharing ratio ― 20 percent for Indonesia ― and the original payment schedule for Indonesia from 2016 to 2026.

However, Seoul said that Indonesia will end up paying less for the jets when they are delivered, which have been designated as “defense goods” eligible for a tax exemption.

The Korean delegation in last week’s renegotiations was led by Kang Eun-ho, head of the Defense Acquisition Program Administration (DAPA), the state arms procurement agency, who arrived in Jakarta on Nov. 9 with six negotiators.

The KF-21 fighter jet project, called the KF-X (Korean Fighter eXperimental) and IF-X in Indonesia, has been called the most expensive military project in Korean history, with a price tag of approximately 8.5 trillion won for development alone.

Aimed at replacing the Korean Air Force's aging McDonnell Douglas F-4 Phantom II and Northrop F-5 fighter jets, the KF-21 Boramae is a 4.5-generation aircraft, on par with the latest F-16 but less stealthy than the fifth-generation F-35 Lightning II developed by Lockheed Martin. It will be the first domestically developed fighter jet.

However, Indonesia has delayed payments of its share since the second half of 2017.

The two countries held six rounds of talks to date, including last week’s negotiation in Jakarta, as the Southeast Asian country requested a reduction in its share of the cost and more technological transfers than stipulated in the original agreement.

Indonesian President Joko Widodo asked President Moon Jae-in for a 5 percent reduction in Indonesia's share from 20 percent to 15 percent during a state visit to Korea in September 2018.

Through renegotiations since October 2018, the two countries narrowed their differences over Indonesia's current 20 percent contribution ratio, agreeing to payments in some other form.

Indonesia's position hardened in October 2019 with the appointment of Prabowo Subianto as the country's defense minister, and joint development was essentially suspended after 110 Indonesian engineers working on the project were recalled amid the Covid-19 pandemic.

Kang led a delegation to Jakarta in Sept. 2020, when he was deputy chief of the DAPA. However, he failed to clinch a deal despite a meeting with Prabowo.

Indonesia signaled a change of heart this past year and sent a defense delegation including Prabowo to attend the April 9 unveiling of the fighter jet’s prototype in Sacheon, South Gyeongsang.

Korea and Indonesia will hold further talks to outline how and when Indonesia will make its overdue contributions, which currently stand at around 800 billion won, DAPA officials said.