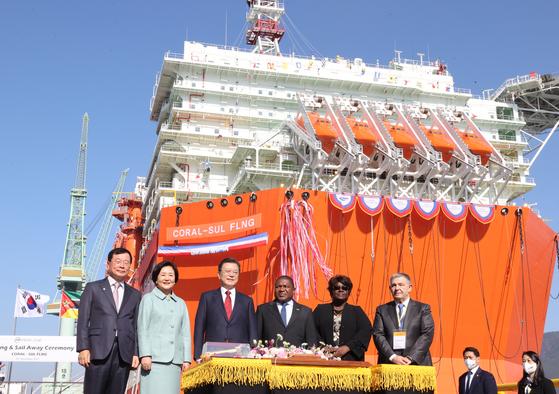 
President Moon Jae-in took part in a christening ceremony for a floating liquefied natural gas (FLNG) facility set to head to Mozambique, also attended by the leader of the southern African country, in a sign of energy cooperation between the two nations.

Moon and Mozambique President Filipe Jacinto Nyusi took part in the naming and sail away ceremony of the Coral-Sul FLNG, a floating facility built by Samsung Heavy Industries after the Korean shipbuilder won a $2.5 billion deal to construct the offshore production platform in 2017.

Moon said at the ceremony at Samsung Heavy Industries’ shipyard in Geoje, South Gyeongsang, “The world is focused on LNG. It has the lowest carbon emission among fossil fuels, and with its high power generation efficiency, LNG is the best low-carbon energy source to replace coal and crude oil.”

He added, “LNG that will be mass-produced by Coral-Sul FLNG will be of great help on the journey to global carbon neutrality.”

Under a deal with the Italy-based multinational energy company Eni, Samsung Heavy built the FLNG facility under a consortium with engineering companies Technip from France and JGC from Japan.

The project develops the Coral South gas field off the northeastern coast of Mozambique's Pemba in Cabo Delgado Province.

The offshore FLNG accesses liquefied natural gas from under the sea, drilling, refining, liquefying, storing and offloading — serving as a floating LNG production base.

Moon said, “A complete transition to carbon-free energy, such as renewable energy and green hydrogen, takes a lot of time and effort.”

It will be the second FLNG with that capacity.

Moon noted that all four of the world's FLNGs were made by Korea, highlighting the competence of the country’s shipyards.

He said that Korea is a “global shipbuilding powerhouse” and highlighted its competitiveness in its eco-friendly, high-value large container vessels and oil carriers.

Moon noted that the Coral-Sul project was successful because of the cooperation from companies around the globe.

Eni said recently that it expects the production for the Coral FLNG project to start in full swing in the second half of 2022.

Moon expressed hope that once LNG production begins in Mozambique, it could be a symbol of friendly bilateral ties.

He noted that the floating facility is projected to produce 3.4 million tons of LNG annually in waters off Cabo Delgado, the hometown of President Nyusi. Once LNG production is under full swing, Mozambique's economic growth is expected to reach over 10 percent each year, with growth also expected in infrastructure and manufacturing.

Nyusi was on a three-day state visit to Seoul, the first such visit in eight years by a Mozambique president. His visit is also the first by an African leader since the start of the Covid-19 pandemic.

The two countries’ presidents and first ladies took part in the ribbon-cutting ceremony also attended by representatives of the related companies and officials from both countries. The leaders held a luncheon meeting afterward.

The vessel is scheduled to set sail Tuesday.